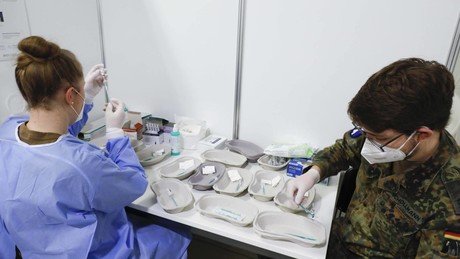 While the fronts between supporters and opponents of mandatory vaccinations of any kind against COVID-19 are becoming increasingly hard and the debates are escalating into religious battles, the Federal Administrative Court (BVerwG) will be hearing on Friday, April 1st, about the mandatory corona vaccination for Bundeswehr soldiers. The subject is two motions by officers opposing the inclusion of this medical procedure in the list of compulsory vaccinations for soldiers. The plaintiffs raise fundamental ethical questions and have serious doubts about the evidence of the measure.

Plaintiffs consider vaccination to be “unsuitable and dangerous”

The Federal Ministry of Defense (BMVg), headed by Christine Lambrecht (SPD) since the beginning of December 2021, had the COVID-19 vaccination carried out on November 24, 2021 list of the basic vaccinations of the military personnel of the Bundeswehr, which are subject to a toleration obligation. The plaintiffs claim this is unlawful. Like the BVerwG communicated, they do not consider the corona vaccinations to be suitable for preventing the disease. They would also harbor too many dangers, some of which are still unknown.

The goal envisaged by the BMVg to prevent the spread of the virus cannot be achieved with these vaccines. Because the preparations prevented neither infection nor transmission. They complain that there is just as little evidence of reliable protection against serious illnesses.

In fact, there are currently more vaccinated than unvaccinated people in corona intensive care units, according to data published by the Robert Koch Institute (RKI) (p. 18). To take. As a result, from February 21 to March 20, the proportion of those who had been boosted had risen to almost 42 percent. Another 23 percent of the patients were then not vaccinated twice, around eight percent once and just under 27 percent.

He also reported on this MDR. According to his calculation, the proportion of unvaccinated people in the total population in the middle of this period was 23.6 percent, just three percentage points lower than their proportion among the COVID-19 intensive care patients in the four weeks examined.

In addition, the applicants criticize the “experimental nature” of the COVID-19 vaccine. The funds are still only approved to a limited extent, and the necessary studies have not yet been completed. According to the plaintiffs, it is also not a vaccination in the traditional sense. Rather, an insufficiently researched, gene-based substance is administered.

The plaintiffs continue to warn that there is a suspicion that side effects, including serious complications, have so far been “considerably underreported” by the vaccine. In individual cases, there was a risk of massive vaccination damage, which would be unreasonable and completely disproportionate to accept. That is why the compulsory vaccination for soldiers violates, among other things, their basic rights to human dignity, life and physical integrity as well as European and international law.

The Federal Ministry of Defense counters that such an obligation does not affect the legal sphere of subordinate soldiers at all, even if it restricts their basic right to physical integrity. Like a mantra, it repeated the well-known reasoning that vaccination “serves to prevent a communicable disease, even if it does not offer complete protection”. According to the ministry, it is enough that it “reduces the likelihood of infection and the risk of severe courses”.

Furthermore, the Ministry does not consider the risk of serious side effects to be particularly high. For this statement, it relied on the Paul Ehrlich Institute (PEI), which “continuously monitors” the use of the vaccines. But there has been a lot of criticism of his methods for a long time. The passive reporting system therefore leads to a considerable under-recording of side effects. Because many problems are not reported, for example because doctors do not see a connection or do not pass on their suspicions due to lack of time. According to the BMVg, the PEI “in its safety report comes to the conclusion that serious side effects occur very rarely and do not change the positive benefit-risk ratio of the vaccination”.

The attribution “very rare” is already wrong according to official criteria. The statement “very rare” stands for drug side effects that occur in less than one in 10,000 people treated. In his most recently published report by the end of 2021, the PEI reported 29,786 suspected cases of serious side effects for 148.76 individual vaccinations. This means that there are already two cases in 10,000 vaccinations and one in 5,000. This no longer falls into the “very rare” category, but “rare”.

It should also be borne in mind that several vaccine doses are administered per person. The total number of people vaccinated at least once in Germany was according to RKI on December 30 at 61.6 million. This means that there are already five serious suspected cases for every 10,000 people vaccinated. That means: For every 2,000 vaccinated people in Germany there was one serious report last year.

Of course, it is possible that not all reports would actually show a causal connection with the syringe if they were examined in detail. The problem is that this hardly ever happens. Instead, the PEI evaluates the reports statistically: it checks whether a reported disease occurs more frequently in vaccinated people than usual. And here again the unknown number of unreported cases thwarts the calculation. The constantly repeated argument of “very rare” severe side effects is therefore not based on evidence, but rather on belief.

In truth, firstly, the exact number of serious side effects is not known at all, secondly, the number of reported cases is already higher than “very rare” and thirdly, there is a strong suspicion that the actual risk, if it were meticulously examined, is greater than repeatedly claimed.

RKI cannot quantify the benefit of vaccination at Omikron

“So far there have been hardly any studies examining the protection of the vaccines under the omicron variant against severe disease […] The studies to date show that the efficacy of the COVID-19 vaccine against any infection and against symptomatic infection is reduced with the omicron variant compared to the delta variant.”

“It is still unclear how long the protection after booster vaccination lasts. There is also insufficient data on transmission under the omicron, which seems to continue to be reduced in vaccinated people, although the extent of the reduction remains unclear. Estimates of effectiveness against the omicron variants will be added as soon as they are published.”

In other words: The RKI believes that the vaccination provides a – rather low – protection against infection, transmission and severe courses, but has no scientific evidence for this. Existing data are not even sufficient to estimate the effectiveness against Omicron. However, this is the variant that is currently in circulation. This is not evidence for compulsory vaccination.

Karlsruhe recognizes dangers but considers them to be acceptable

In short: The BMVg and other advocates of mandatory vaccination swear by a current benefit of the COVID-19 vaccination that not even the RKI, to which they refer, can begin to quantify. But it is also clear that if the benefit cannot be quantified, every compulsory vaccination will become a serious ethical problem, no matter how high the risk. It is, after all, a medical procedure.

Meanwhile, there is no doubt that there is a risk of serious side effects and even death. This is also clear to the Federal Constitutional Court (BVerfG). In a press release With regard to its decision of February 10, with which it had rejected an urgent application against the compulsory vaccination in the health system, which came into force on March 16, the BVerfG states the following:

“In individual cases, serious vaccination side effects can also occur, which in extreme exceptional cases can also be fatal.”

However, those who are obliged to vaccinate could alternatively change jobs if they do not want to take this risk. Overall, the highest German court found the benefit of the vaccination to be higher than a possible risk. The vaccination would protect “vulnerable groups”. But nobody, not even the RKI, can put a precise figure on this protection.

weighing human lives against each other?

But even if the vaccines currently on the market provided a certain degree of protection against the virus being passed on, the question ultimately arises: Can the state force or even force people to accept an unquantifiable risk to their own lives in order to (possibly ) to protect other people? So can he weigh human lives against each other? Because that’s exactly what he does. In its last safety report, the PEI declared 85 of the 2,255 deaths reported by the end of 2021 to be probably caused by the vaccination.

16 years ago, in February 2006, the federal constitutional judges denied this ethical question. At that time it was about whether the federal government could shoot down a passenger plane in an emergency and thus kill people if it was used as a weapon by terrorists in order to save other people who were threatened.

The answer from Karlsruhe was clear: no. Because the state should not presume to regard one life as more worth saving than another. According to the constitutional judges at the time, this contradicted the basic rights to human dignity and life that were to be guaranteed by the state.

When it comes to compulsory vaccination, however, the wind is currently turning in a different direction. Who it ends up being is just less clear than when a plane is shot down. What is certain is that victims or their relatives cannot rely on adequate compensation from the state. There is no point of contact for them, and their suspected vaccination damage is often not even taken seriously, let alone assessed as such, as the MDR recently pointed out to report knew. Vaccination damage is therefore a taboo subject; Ethics and human dignity fall by the wayside.

More on the subject – Heavy artillery against Omicron? The data don’t show that