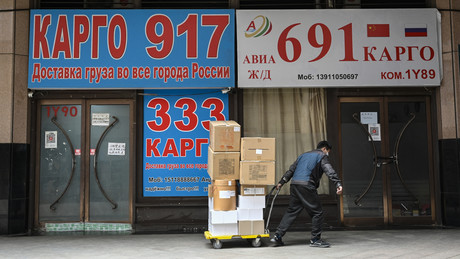 Since numerous Western brands suspended their activities in Russia because of the Ukraine war, Chinese companies see their chance to open up the Russian market. New opportunities are primarily opening up for small and medium-sized companies.

According to the South China Morning Post newspaper see small and medium-sized companies from China in connection with the exodus of western companies from Russia the chance to open up a new large market. Scores of Chinese businesspeople now see the neighboring country as a land of opportunity – despite the sanctions imposed on Russia and warnings from the US and its allies not to do business with Moscow.

According to the newspaper, some Chinese companies already present on the Russian market have started to expand their business and offer in Russia. Some are currently analyzing the possibilities of doing business in the neighboring country. The Chinese embassy in Russia is now encouraging local companies to take advantage of the business opportunity that has opened up as a result of the crisis and “to fill the void in the Russian market”.

In this regard, the paper quotes Liu Yunpeng, a food importer based in Russia. Not least because of the devaluation of the ruble, he sees an opportunity for his business in the current situation. The withdrawal of many Western brands has left great potential for Chinese manufacturers. Now that several Russian banks are excluded from the international banking communications network SWIFT, Russian companies are increasingly wanting to settle their transactions in yuan, whereas previously they preferred to pay in dollars or euros.

“We’ve long advised our customers to pay in yuan because of the volatility of the exchange rate. But that never happened because our customers didn’t want to go through the hassle of opening new bank accounts.”

However, after the respective Russian banks were sanctioned, the Russian partners immediately found other financial institutions to process the transactions in yuan. Business returned to normal within a week, Liu said.

For his part, analyst at investment firm Loomis, Sayles & Company LP Bo Zhuang believes that bilateral trade between China and Russia will increase in volume and pace in the coming years. Food producers and suppliers of spare parts for cars and pharmaceutical companies would benefit in particular from the withdrawal of Western companies.

China has remained Russia’s largest trading partner for 12 consecutive years. Last year, bilateral trade broke the $147 billion mark. According to data from Beijing, that was 35.9 percent more than in 2020. Although the US is pressuring China to ensure that the Beijing government shows a clear edge against Moscow, the Asian giant wants to continue cultivating its mutually beneficial business dealings with the neighboring country . According to the South China Morning Post, however, such opportunities appear to be limited to private companies and small and medium-sized enterprises in China, as state-owned enterprises are unwilling to risk openly violating Western sanctions.