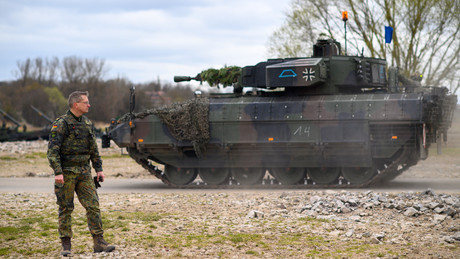 The Bundeswehr practiced crossing the river with tanks. Although, according to Bundeswehr statements, there should be no connection to the Ukraine war, the participating Panzergrenadierbrigade 37 is intended to be part of NATO’s rapid reaction force.

In the north of Saxony-Anhalt, Bundeswehr forces have practiced crossing the Elbe with heavy vehicles. Tanks and other vehicles were ferry across the Elbe on Saturday in the Stendal district between Schönhausen and Tangermünde with a floating bridge.

The maneuver took place as part of the “Wettin Sword” exercise, which took place over several days and which takes place in the army’s combat training center in the Altmark, among other places, and to which the vehicles are on their way. According to the Bundeswehr, soldiers from Panzergrenadierbrigade 37 and a total of 340 vehicles should take part, including around 75 tracked vehicles.

According to the Bundeswehr, the battle group is intended for the rapid reaction force of NATO. The “Wettin Sword” exercise is not directly related to the war in Ukraine and is part of a series of exercises planned for several years, the Bundeswehr said.