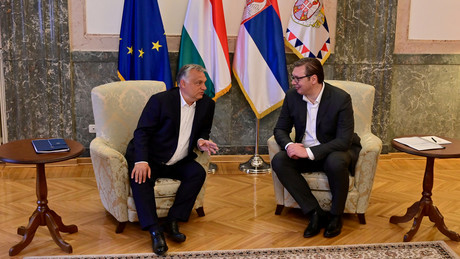 Hungary elects a new parliament. Although polls predict losses for the ruling party Fidesz, it is questionable whether the united opposition will actually win in the end. Citizens in Serbia are also called upon to cast their votes. There are three elections there.

Viktor Orbán has been Hungary’s prime minister for 12 years. So far, his Fidesz party has had a two-thirds majority in parliament with 133 seats. This time, the Fidesz party and its Prime Minister Orbán are facing a united opposition of six parties – from ex-communists to the left-green party “Dialogue for Hungary” to the former right-wing Jobbik party, which has, however, been more moderate in recent years. Their joint candidate is called Péter Márki-Zay. The 49-year-old heads the non-party “Movement for a Hungary for All”.

According to polls, Orbán and his Fidesz party are threatened with heavy losses, but it is questionable whether the united opposition will actually succeed in winning the majority. Pollsters predict a neck-and-neck race. However, the government camp is given a slight lead.

The opposition accuses the 59-year-old Orbán and his party of corruption, clientelism and overwhelming media power, among other things. The good economic relations and the closeness of the Orbán government to Russia were also an issue in the election campaign, especially after the start of the war in Ukraine.

Polling stations open at 6 a.m. and close at 7 p.m. Significant results are expected late in the evening.

In Hungary’s neighboring country of Serbia, around 6.5 million citizens entitled to vote are now called upon to cast their votes in three elections. Presidential, parliamentary and, in parts of the country such as the capital Belgrade, local elections are held. In contrast to Hungary, the opposition in Serbia is less united. 19 parties and lists are running in the parliamentary elections.

Regarding the election of the new head of state, some analysts predict that opposition candidate and former chief of staff Zdravko Ponoš could force President Vučić, who has held the post since 2017, into a runoff. A loss of power for Vučić is still questionable.

In Serbia, too, the election campaign revolved primarily around corruption and nepotism. The governing coalition was accused of having engaged in clientelism. Loyal party members were gifted positions in state-owned companies and jobs to generate a loyal electoral army. Vučić was also accused of running his country in an increasingly autocratic manner and of bringing the state media completely into line with him.

The proximity of Belgrade to Moscow was also discussed during the election campaign. Serbia is the only country in the region that didn’t impose sanctions on Russia after attacking Ukraine. In addition, Belgrade took a rather neutral position in this conflict. Pro-Western opposition politicians accused Vučić and his Progressive Party, which has been in power since 2012, of endangering the country’s official EU accession plan in this way.

According to current calculations, only the opposition candidate Vladeta Janković could win the election in the capital Belgrade. The 82-year-old retired university professor and former Serbian ambassador to London and the Vatican is well respected among the population and could unite conservative, pro-European and liberal voters, according to analysts.

More on the subject – Ukraine Conflict: The Death of Europe and the Birth of a New Order