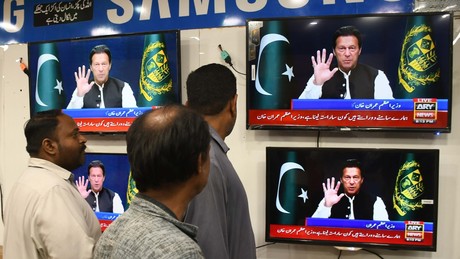 Pakistan’s Prime Minister Imran Khan announces early elections. A vote of no confidence against him was unexpectedly rejected as unconstitutional. While the opposition protested against it, Pakistan’s army chief, General Bajwa, called for closer ties with the United States.

Pakistani Prime Minister Imran Khan surprisingly announced early elections. Earlier on Sunday, the deputy speaker of parliament unexpectedly rejected a no-confidence vote against Khan as unconstitutional and did not carry it out.

Khan’s PTI party lost its majority in the National Assembly last week when seven MPs from its coalition partner decided to join the opposition. The prime minister’s opponents have insisted that this gives them a real chance of ousting Khan, who has been in office since 2018.

But the deputy speaker of the parliament, Qasim Khan Suri, surprisingly declared the opposition’s motion of no confidence invalid, citing “interference from abroad” as the reason. Imran Khan, who claims there is a US-led “international conspiracy” to overthrow him, then addressed the nation in a televised address, urging citizens to “prepare for elections.” Addressing the public, he said:

“They will decide the future of this country, not the corrupt or the foreigners.”

However, the opposition does not want to accept the decision on the vote of no confidence and announced immediately after the video address that they wanted to hold a sit-in in parliament. A little later, the domestic political situation worsened. Pakistani President Arif Alvi dissolved the country’s parliament. Alvi agreed to Prime Minister Imran Khan’s advice to dissolve the National Assembly, the President’s Secretariat said in a statement on Sunday. The opposition now wants to appeal the matter to the Supreme Court.

While a power struggle is currently being waged domestically, the influential commander-in-chief of the Pakistani army, General Qamar Javed Bajwa, spoke up on Saturday and indicated a desire for a course correction in foreign policy. He said his country has “excellent” relations with the United States and wants to develop them without jeopardizing strategic ties with China, which are also important. General Bajwa explained at a security forum in Islamabad:

“We have a long and excellent strategic relationship with the US, which remains our largest export market.”

Pakistan also maintains close strategic ties with China, “which is reflected in our commitment to the Pakistan-China Economic Corridor,” the Pakistani army chief said. The aim is to deepen and expand relations with both countries “without endangering the relationship with the other country,” the army chief continued.

In his speech, the general, in particular, deviated from Prime Minister Khan’s neutrality position on the Russian-Ukrainian conflict. While acknowledging Russia’s “legitimate security concerns,” he stressed that Moscow’s “aggression against a smaller country cannot be tolerated.”

“Pakistan has always called for an immediate ceasefire and cessation of hostilities. We support immediate dialogue between all sides to find a lasting solution to the conflict,” Bajwa said, adding that the “Russian invasion against Ukraine… . is a great tragedy that must be ended immediately.”

Prime Minister Khan has repeatedly claimed in recent weeks that a “foreign-backed conspiracy” is behind an attempt to overthrow him, pointing out that it is being funded with millions of dollars of foreign money and “using our people”.

He indicated that his refusal to join the US and NATO in condemning Russia’s military operation in Ukraine was what sparked the plot.

Information Minister Fawad Ahmed Chaudhry on Friday claimed the country’s security authorities were reporting a plot to assassinate Khan, the second such statement this week. PTI boss Faisal Vawda had previously claimed that Khan’s refusal to “sell the country” was behind the plan to have him killed.

Pakistan has a long history of coups and has been under military rule for almost half of its existence. No Prime Minister of Pakistan has ever served a full term. Khan is said to have fallen out with the influential military leadership.

The opposition, in turn, accused Khan of poor governance and incompetence on economic issues. Most recently, the prices for food, petrol or gas in the country with around 220 million inhabitants had risen massively.