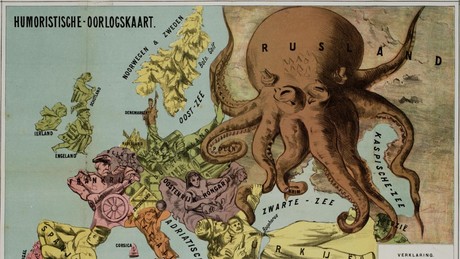 The bizarre Russophobia that is currently pounding the minds of Westerners seems like a transcendent rapture from this one world. But experience has shown that when a leadership team begins to only believe in their own propaganda intended for others, it becomes really dangerous.

Now let’s talk about what you might call “ethnic” phobias. So I would just be interested to know why there is no noteworthy “polonophobia”, no “ukrophobia”, not even phobia against “the Americans”, i.e. against Americans in Russia. If you ask any passer-by on the street and you get the answer “America sucks”, then the interviewee usually means the US leadership and certainly not the unknown cowboy from Utah or a metrosexual IT specialist from California.

I don’t even want to go back to the overly emotionally colored stigmas of history – and yet for some reason Babi Yar was located in what is now Ukraine – which now affects certain phobias among neighboring peoples. “The Poles” also covered themselves with somewhat dubious fame in this respect – both before and during the Second World War. And roughly the same people are now providing a vivid example – this time explicitly for Russophobia – in the 21st century, eight decades after Auschwitz. In other words, they don’t really care who exactly they hate – today it’s just “the Russians” – and they’re not even embarrassed about the numerous historical parallels. This means that although the Russians themselves do not show any appreciable ethnophobia, some Poles (and also Ukrainians) do, for example, show it very blatantly. And not just her.

I must confess, when I first heard what Polish Prime Minister Mateusz Morawiecki said about the rise in Russophobia in Poland at a press conference on March 30th, I thought (or hoped?) that he was just ashamed of himself his countrymen.

Unfortunately, that was too trusting: this prime minister of a European, indeed of an EU member state, actually found a reason for national pride in this. He claims his country can “set the standard” for Russophobia, which is becoming mainstream in Europe. “That’s the reality,” it was said. So how do you mean?..

So there are indeed people in patriotic responsibilities at the level of an entire nation who take genuine pride in their Russophobia. And that already smells alarmingly like a serious psychological problem.

But the most interesting thing is that nobody from the “civilized”, “democratic” and always “tolerance-minded” leadership of the European Union puts him down for it. Nobody in Brussels sees this as a problem, i.e. neither chauvinism nor racism nor incitement to ethnic hatred. Nothing, zero, nada – as if everything in this world were in divine order.

But what are we actually talking about here? This wave, which is sweeping across Europe from the West at the instigation of the local press and the political leadership, is part of a conscious campaign. So why should von der Leyen oppose this campaign? This is the quintessential product of this “European” policy of the EU.

It’s about state sanctions not only against the “evil Putin”, but against an entire people. “We will ruin the Russian economy”, like that says the deeply pacifist environmental activist Annalena Baerbock, who happens to be the current Federal Foreign Minister. That is, they don’t just think in terms of “evil Putin,” but say it openly and honestly mean it: “The whole Russian nation is disgusting, and we’re going to tear it down.” But, as the Russian vernacular says, “your tear-down organ is still too small for that”.

In a frenzy of hate most befitting the gutter (just for the record, it should be emphasized again: hate purely for ethnic reasons), which has gripped the streets as well as pubs, as well as universities and banks, in such furious hatred the brain is known to be clouded – and such politicians end up not understanding the consequences of their own actions.

Is that state planning, roughly on the level of a textbook on political economy? They have never heard of this. They simply let their own propaganda sink in and are now themselves convinced that Russia is a gas pump made into a state, built for the sole purpose of politely continuing to feed it fuel, while arduously circumventing its own sanctions. It seems that causal cause-and-effect relationships are rocket science for these executives.

And only then do details, subtleties about what’s going on with this mere “pump station” still everything has to do with it. For example, it suddenly turns out that all the drastic sanctions have been imposed on a state entity that supplies the rest of the world with vast amounts of wheat for bread, with uranium … right down to rare elements, of all things, indispensable for the production of microchips, whose import to Russia had just been banned as a precaution. So such people either don’t understand at all how the world and its economic interconnections are structured – or they have unknown and unbelievable reserves, perhaps of raw materials, but certainly of unprecedented audacity.

We all know very well that former US ambassador to Russia Michael McFaul is now oil and natural gas demanded from Russia – which the West might pay later at some point if Russia finally behaved decently from the West’s point of view. He didn’t suggest it, just simple really required. And that’s how easy it is in the west. But then they are surprised when, instead of hitting the prey they had hoped for first, their boomerang unexpectedly spins back – and doesn’t end up in their hands at all, but straight on in the knee or on the back of their head.

And what does all this have to do with the Russophobia that Mateusz Morawiecki is so proud of? Very easily. This age-old story shows once again that as soon as economic or political problems arise in a country, possibly through its own fault, the citizens’ attention must be drawn to the search for an enemy as quickly as possible. And this search is expediently conducted from an ethnic point of view. Europe has seen it all before. And we should all know and understand how this ends.