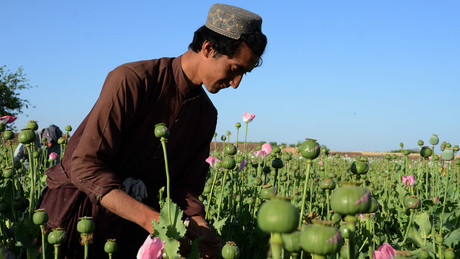 The Islamist militia, which seized power in Afghanistan again last year after 20 years of resistance, has often been accused of financing its fight with proceeds from the opium trade.

Taliban Supreme Leader Mullah Hibatullah Achundsada has banned the cultivation of opium, which is used in the manufacture of morphine and heroin, in a decree published on Sunday. In doing so, he made good on his promise to ban the drug, which he had given after taking power last year. It is estimated that in 2021, Afghanistan accounted for 90 percent of the world opium trade.

“If anyone violates the decree, the harvest will be destroyed immediately and that person (…) will be treated according to Sharia.”

In addition, the Islamist group ruling Afghanistan also banned the consumption, transportation, sale, export and import of all types of drugs and alcohol.

The Taliban expect stiff resistance within the group to the ban and reported that the number of farmers cultivating poppies has increased in recent months, Reuters news agency learned from circles in the militant group.

On Sunday, Afghan farmers in southern Helmand province, the Taliban’s political heartland, picked up their first opium crop of the season. Poppy prices more than doubled amid rumors of a ban, according to an anonymous farmer in the province who spoke to Reuters.

The suppression of poppy cultivation is expected to hit farmers. Last August, the Taliban asked for “international help” to enable Afghan farmers to plant other crops to replace the poppy crops that are thriving in Afghanistan. The United Nations then called for action to implement the promises.

When the Taliban returned to power after seizing the capital Kabul last year, they announced that their government would return to its zero-tolerance policy on drugs. The militant group ruled Afghanistan from 1996 to 2001 until it was overthrown in a US-led invasion of the country.

More on the subject – Human Rights Watch is sounding the alarm: increasing numbers of Afghan children are dying of malnutrition

90 percent of the opium and heroin produced worldwide came from Afghanistan last year. Production and export are concentrated in the Taliban-controlled areas. The militant group is believed to have taxed opium cultivation during their 20-year insurgency to fund their struggle.

“How come the drug was exported all over the world when they (US-led forces) were in full control of Afghanistan?”

UN officials reported that the Taliban were estimated to have made more than $400 million from the drug between 2018 and 2019. The area planted with opium hit a record high in 2017, averaging around 250,000 hectares over the past four years, about four times the level in the mid-1990s, according to UN figures.

The United Nations expects another Asian country to expand its poppy cultivation, namely Myanmar, which was the world’s largest heroin producer in the 1980s before lower-cost Afghanistan took the lead.

More on the subject – For the first time since the Taliban took power: UN Security Council extends Afghanistan mission