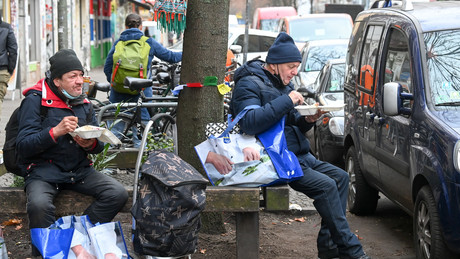 The consumers can always bear the costs of the crisis – and now also the consequences of the Ukraine war. The population is being introduced to renunciation and poverty by those who will definitely not tighten their belts: the “elite” from politics, business and the media.

In recent years, escalating inflation, which could transform into the specter of deflation, has been considered completely unrealistic in the political and economic mainstream. In Washington, Brussels, Berlin and Frankfurt am Main in particular, the always home-made crises of our time massively fueled developments that could lead to a second financial crisis like 1923 or an economic crisis of the century like 1929 – with the well-known fatal consequences. But as late as May 2021 – in the midst of the Corona crisis – Marcel Fratzscher, head of the German Institute for Economic Research, wrote down his Blog:

“Fear of inflation is raging again in Germany. For decades, it has been the favorite sport of some in politics and business to arouse fear of the specter of currency devaluation, which dispossesses people and damages the economy. The European Central Bank (ECB) must change course They are currently demanding that financial policy should no longer provide so much support to companies and people – instead, it must return to the black as quickly as possible. In terms of economic policy, however, this would be the biggest mistake that politicians could make in this deep crisis. […]

Higher inflation would be more of a boon than a concern for many companies. Many have borrowed heavily during the pandemic and now need to generate additional income to pay down debt and make new investments. If inflation rises, they could service their loans more easily. […]

The fact that the financial markets and companies are expecting an inflation rate of just 1.7 percent in the euro area over the next five years should also be reassuring. In other words, there’s a much better chance that inflation will continue to be too weak rather than too strong for the next five years – and that people won’t have to worry about a creeping dispossession of their savings.”

As in this case in Germany, being fatally wrong (“What do I care about my gossip from yesterday?”, Konrad Adenauer) has no consequences whatsoever, as long as you hold the right position. On the other hand, those who speak unpleasant truths are mercilessly canceled; or when was the last time you were able to experience economists like Dirk Müller, Floriam Homm, Markus Krall or Max Otte with Anne Will or Markus Lanz?

The financial, climate and corona crises did not fall out of the blue, as the latter men always emphasize. Rather, their consequences for the population were determined by political decisions made by “provincial quota politicians […]lobbied and advised by think tank-hardened economic strategists, technocrats and transhumanists who have done their homework” (Raymond Unger, “Vom Loss of Freedom”, Munich 2021, p. 493).

The Russian is to blame: “We’re all getting poorer”

Now there is also the war in Ukraine – again a complete surprise for Western politicians, who always only “drive on sight” (Angela Merkel). Who is interested in the complex developments of the last three decades and beyond? The enemy image “Putin” or “the Russian” is now gladly taken along to all the globalist agendas, which in “the best Germany that has ever existed” (Federal President Frank-Walter Steinmeier, October 3, 2020) with German thoroughness like nowhere else to go to extremes, whatever the cost. In addition to “freezing for freedom” (ex-Federal President Joachim Gauck), according to Economics Minister Robert Habeck, it is now also clear: “We are all getting poorer” – not least because of “solidarity” with Ukraine.

So while the German employee, consumer and saver is prepared on the one hand for the fact that the biggest economic crisis in decades will soon rob them of every last cent and a piece of bread could soon cost ten euros, it is clear who is to blame: “the Russians” . We are familiar with the game of breaking media taboos that were unthinkable ten years ago, and the current propaganda of the “Images of Butscha” is strongly reminiscent of the “Images of Bergamo” in its social totality.

So what are we sworn to this time? A total embargo on Russian gas and oil? For freedom, solidarity and peace with Ukraine? Even if the lights go out in Germany? Maybe. It is interesting and scary at the same time how easily the anti-Russian enemy images from the first half of the 20th century are “revived” – or did they never disappear, especially in West Germany?

The Handelsblatt handle on Tuesday in one of her articles with reference to a study by the DZ Bank, she mentioned the “spectre of stagflation”. But at the same time it says:

“As understandable as that concern may be […] we are currently assuming that price pressure will decrease noticeably in the second half of the year, while growth in the euro area should pick up noticeably and in the USA should remain robust.”

Surprisingly, Isabel Schnabel, a member of the Executive Board of the European Central Bank (ECB), takes a more pessimistic view. She said over the weekend:

“The war will put a significant brake on economic recovery. And it will push inflation even further beyond our target for an extended period of time.”

Also on the homepage of the Tagesschau last Wednesday you could see the word “Stagflation” readwhere it said with great clarity:

“In March, the inflation rate skyrocketed to 7.3 percent, its highest level in around 40 years. The background to the sudden increase is the sharp rise in prices for energy products. Price pressure is likely to remain considerable many companies are raising their prices like never before.The corresponding barometer from the ifo Institute climbed to a high of 54.6 points in March after 47.6 in February.

Together with the gloomy prospects for economic development, the prospect of stagflation is becoming more firmly established. Because of the consequences of the Ukraine war, the ‘economic wise men’ have significantly lowered their economic forecast for this year.”

the Bavarian radio tried to calm down on Thursday, because you can’t really do anything about stagflation anyway:

“The phenomenon of stagflation is difficult to combat in terms of economic policy. There are no common recipes for it. In economics, a supply-oriented economic policy is usually recommended. In other words, measures that relieve companies on the cost side so that they can continue to produce. Strengthen the demand side, for example The example of relieving the burden on citizens doesn’t help much in this case, but at least economic and social hardship is avoided in this way – provided the relief is used in a targeted manner.”

So everything is not that bad?

“In contrast to the oil crisis in the 1970s, however, there are some indications that the risk of a severe recession is not quite as high as it was then. Because there is rather a shortage of applicants on the job market, so there is – at least for the time being – no sharp increase in the number of unemployed And companies can ramp up production very quickly once the supply bottlenecks are overcome. So there is hope that this time the crisis will not be as dramatic as it was in the 1970s.”

No applicants, no unemployed – it’s that simple. The fact is: With political and media salami tactics, citizens are once again being mentally prepared to make more and more concessions in favor of the state and its clientele, who are generously supported by taxpayers. Hyperinflation or stagflation is just what they need: the state can massively apologize at the expense of its citizens and large corporations with well-paid lobbyists can buy up the last remnants of German medium-sized companies cheaply. Seen in this context, the anti-Russian sanctions from the end of February, which primarily harm Germany like no other country but Russia, are just another milestone in this obviously desired development. Or how else can one explain that some “economists” even thinking about letting the lights go out in this country?

More on the subject – Against the wall – sanctions as self-poisoning