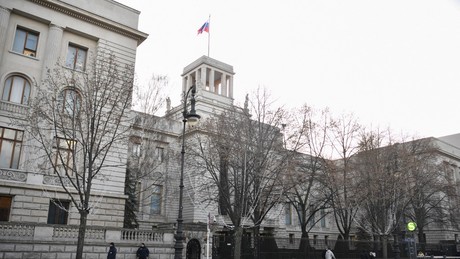 The escalation in the relationship between Germany and Russia is entering the next round: the federal government is expelling a large number of employees of the Russian embassy. France also decided on Monday to expel numerous Russian diplomats.

The federal government has declared 40 Russian diplomats in Germany “undesirable persons”. A decision was made on Monday to “declare a significant number of members of the Russian embassy to be undesirable persons who have worked here in Germany every day against our freedom and against the cohesion of our society.” This was announced by Foreign Minister Annalena Baerbock (Greens) in Berlin. If diplomats are declared undesirable persons, this is tantamount to expulsion.

The work of the affected Russian diplomats is “a threat to those who seek protection from us,” Baerbock said in justification for the expulsion. And further:

“We will not tolerate this any longer. We informed the Russian ambassador this afternoon.”

The Russian Ambassador Sergei Netschajew was summoned to the Federal Foreign Office by State Secretary Andreas Michaelis and informed of the expulsion. The persons concerned now have five days to leave Germany. The diplomats are accused of being part of the Russian intelligence services.

“We selected 40 people who we assign to the Russian intelligence services,” said Federal Interior Minister Nancy Faeser (SPD) on Monday evening to the German Press Agency (dpa). And she added:

“We have decided that these 40 people must now leave our country as soon as possible.”

This is “another consistent step against the Russian leadership, which is waging a horribly brutal war against the Ukrainian civilian population.”

The German security authorities are keeping a close eye on which intelligence tools the Russian government is using, Faeser said. It’s about protecting Germany against “Russian espionage, attempts to exert influence, lies and war propaganda.” They will not allow “this criminal war of aggression to also be waged as an information war in Germany,” the SPD politician continued.

“We will also respond to this malicious act by the German political machine.”

In such cases, Russia usually reacts by expelling a similar number of diplomats.

France also decided on Monday to expel Russian diplomats. It was decided to expel numerous Russian employees with diplomatic status from the country whose activities run counter to France’s security interests. This was announced by the Ministry of Foreign Affairs. France’s responsibility is always to ensure the security of the French and Europeans, it said. According to information from the French news agency AFP, 35 people are said to be affected by this measure. In addition, Lithuania and Latvia today downgraded their diplomatic relations with Russia and recalled their ambassadors from Moscow. The Russian envoys, for their part, now have to leave Riga and Vilnius.

Former Russian President Dmitry Medvedev announces a tough reaction to the expulsion of Russian diplomats from Western countries. “It will be symmetrical and destructive for bilateral relations,” the deputy chairman of the Russian Security Council wrote on his Telegram channel on Monday evening. The expulsion of diplomats as a means of exerting pressure is a practice that is “pointless” and “doesn’t work.”

More on the subject – Live ticker on the Ukraine war – Moscow: There is no doubt that provocation in Bucha is staging