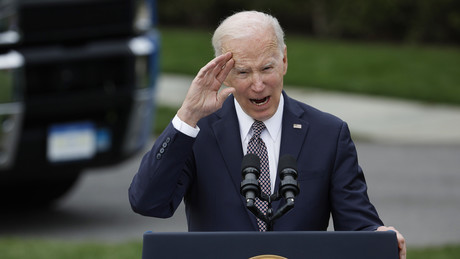 Washington is calling for a war crimes trial against Russian President Vladimir Putin. However, information should first be collected so that all details are known, said US President Joe Biden on Monday.

US President Joe Biden joined the global outcry over the alleged massacre of civilians in Bucha and called for a war crimes trial against Russian President Vladimir Putin at a news conference on Monday.

He spoke of the need to “gather information and get all the details” before an actual war crimes trial could take place.

This comes at a time when the US is trying to suspend Russia’s membership of the UN Human Rights Council. As Linda Thomas-Greenfield, the US Ambassador to the United Nations, announced Monday, this is “in response to allegations that Russian forces committed war crimes in Bucha and elsewhere in Ukraine.” Thomas-Greenfield urged the 140 nations that voted last month to condemn Russia’s military operation in Ukraine to “walk the talk”.

The International Criminal Court (ICC) opened an investigation in March into alleged war crimes and other crimes allegedly committed during the Russian military offensive in Ukraine. ICC Prosecutor Karim Khan said in a statement that he had “already found a reasonable basis for believing that crimes falling within the jurisdiction of the Court have been committed.”

Pictures were released over the weekend from Bucha, a town northwest of Kyiv, showing several bodies in civilian clothes. Kyiv blames the Russian armed forces for this. However, Russia’s Deputy Permanent Representative to the UN Security Council, Dmitry Polyansky, described the incident as a “blatant provocation by Ukrainian radicals”.

Despite Kremlin spokesman Dmitry Peskov pointing out numerous inconsistencies that cast doubt on the veracity of the “evidence” presented by Ukraine, US officials from both parties have echoed Kiev’s claims and have accused Russian forces of war crimes. Bob Menendez, the chairman of the US Senate Foreign Relations Committee, and Jim Risch, the senior Republican member, blamed Vladimir Putin for the incident and demanded “accountability.” Last month, the US Senate passed a resolution labeling the Russian President a war criminal.

However, the US is not a party to the Rome Statute, which established in 2002 an “independent permanent International Criminal Court in conjunction with the United Nations system to have jurisdiction over the most serious crimes affecting the international community as a whole”.

While the Obama administration has maintained a working relationship with the court as an observer, US attitudes toward the international judicial body hit a nadir under US President Donald Trump. In a speech to the United Nations in 2018, he described the ICC as part of an “unelected, unaccountable global bureaucracy with no jurisdiction, no legitimacy and no authority”.

In 2020, the US imposed sanctions on ICC officials in retaliation for investigating possible war crimes committed by the US over the course of its 20-year war in Afghanistan. When the Biden administration lifted those sanctions in 2021, it specifically insisted on US autonomy, with US Secretary of State Antony Blinken addressing Washington’s “longstanding objection to the Court’s efforts to exercise jurisdiction over personnel from non-state parties such as the United States and Israel “, expressed.

More on the subject – Lavrov: Recordings from Bucha are an anti-Russian staging