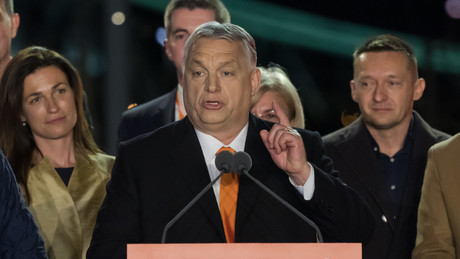 Just one day after the election victory of Prime Minister Viktor Orbán’s ruling Hungarian party, the European Union wants to take a new step against the Eastern European country in the dispute over alleged violations of the rule of law.

Hungary is the first country to face a procedure to cut EU funds over possible rule of law violations. EU Commission President Ursula von der Leyen announced on Tuesday in the European Parliament in Strasbourg that her authority would take the first step in the so-called rule of law mechanism. The EU Commission informed the Hungarian authorities about this on Tuesday.

“In Hungary, we made it very clear, the problem is corruption,” said von der Leyen. It is currently not possible to find a common denominator. Von der Leyen received applause for her announcement in Parliament.

In order for Hungary to actually have EU funds cut, the final step still requires the approval of at least 15 of the EU states with 65 percent of the EU population. Before that, Budapest has several opportunities to comment on the allegations.

The so-called EU rule of law mechanism has been in force since the beginning of 2021. Its purpose is to ensure that violations of the rule of law, such as the separation of powers, no longer go unpunished if they threaten to misuse EU funds.

Poland and Hungary saw themselves as being particularly in the focus of the instrument and therefore complained to the European Court of Justice. However, he dismissed the lawsuits in February. Both states get billions from the common budget every year.

However, Hungary’s Prime Minister Viktor Orbán should feel encouraged in his course. His national conservative party Fidesz clearly won the parliamentary elections on Sunday. She received 53 percent of the votes and thus secured a constitution-amending two-thirds majority in parliament for the fourth time in a row.

The European Parliament has been putting pressure on the EU Commission to trigger the rule of law mechanism for a long time. However, the authority always emphasized that it wanted to wait for the ECJ ruling. As a result, no case was lost, said von der Leyen on Tuesday. Parliament even sued the EU Commission before the ECJ for its hesitancy – the proceedings are still ongoing.

More on the subject – Hungary rejects energy sanctions against Russia