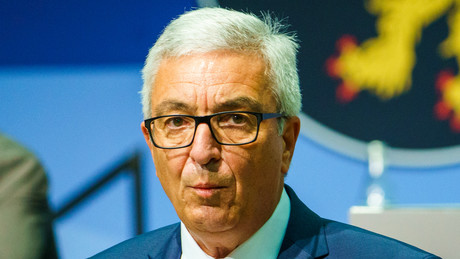 There is a massive military presence in the otherwise tranquil Rhineland-Palatinate. The reason for this are the many US military bases. Investments should now be made in this. The Rhineland-Palatinate Minister of the Interior is in the USA to clarify the last details.

The Rhineland-Palatinate Interior Minister Roger Lewentz (SPD) has been in the USA for talks since Saturday. According to his ministry, the minister will meet with senior officials from the US administration and Congress during his week-long trip. According to Mainz, the main topics to be discussed at the meetings are related to the US military bases in Rhineland-Palatinate. The trip would be a routine visit, which should also be marked by the Ukraine war.

Against the background of the many US military properties in Rhineland-Palatinate, Lewentz emphasized the importance of regular exchanges between his state and the USA before leaving:

“Especially in times when Europe is exposed to new threats that have long been believed to be overcome, the regularly maintained exchange is of enormous value. The discussions will focus on the effects of the current security situation on the US locations in Rhineland-Palatinate.”

The minister’s delegation also includes Colonel Stefan Weber, commander of the Bundeswehr’s Rhineland-Palatinate State Command. According to the ministry, the talks will also deal with the plans for the 2023 budget year recently announced by the US government. According to the US plans, over 500 million US dollars are to be invested in the US military bases in Rhineland-Palatinate, of which 200 million US dollars alone are noted for the base in Baumholder. The Spangdahlem, Ramstein Büchel and Mainz locations could also benefit. The US Air Force had already moved additional aircraft and troops there in the course of the Ukraine conflict in recent months.

Just last week, the new US ambassador to Germany, Amy Gutmann, emphasized the importance of NATO’s presence in Germany at a press conference. Gutmann explained that she was grateful that Germany was taking on a leading role in the European Union and in NATO because Germany was now investing 100 billion euros in modernizing the military:

“I’m well aware of the skepticism. But NATO is a purely defensive alliance. Imagine if NATO didn’t exist. We couldn’t have set it up so quickly and Putin wouldn’t be satisfied with a victory against Ukraine. “

More on the subject –NATO countries train in Germany to destroy Russian air defense systems: “Against the enemy”