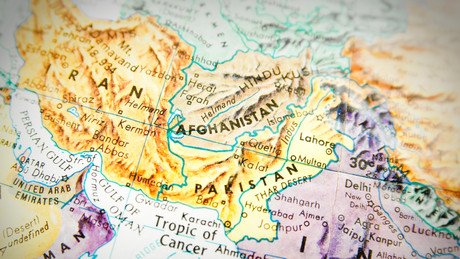 Pakistan’s Prime Minister Imran Khan had spoken of a coup attempt against him instigated by the USA after a failed attempt by opposition MPs to table a motion of no confidence against him. Neighboring Iran is watching developments closely.

Iranian Foreign Ministry spokesman Said Chatibsadeh said Tehran is closely following political developments in neighboring Pakistan amid the constitutional crisis there, Iranian news agency Tasnim reported. The Iranian diplomat reiterated that the country’s residents should decide their future for themselves, without foreign interference.

More on the subject – Government crisis in Pakistan: How did Imran Khan suddenly become a villain in the West?

Chatibsadeh stated at a press conference on Monday:

“We are closely monitoring developments in Pakistan.”

The developments in the “friendly and brotherly” neighboring state are very important for Tehran.

The deputy speaker of the Pakistani parliament had previously decided to reject a motion of no confidence in the incumbent government of Prime Minister Imran Khan and his party Pakistan Tehreek-e-Insaf, because the motion was unconstitutional. Pakistani President Arif Alvi then dissolved parliament in consultation with Khan in order to pave the way for new elections.

The opposition parties criticized this step and declared that they wanted to appeal to the constitutional court. They claim that 195 MPs would support a no-confidence vote. It would take 172 deputies to overthrow the prime minister.

Alvi urged Khan and opposition leader Shehbaz Sharif to agree on a new interim prime minister, but Sharif refused to cooperate with Khan.

Chatibsadeh explained that such processes are normal in Pakistan’s parliamentary system. The Iranian diplomat stressed:

“We all have to ensure that the Pakistani people run their country’s affairs without foreign interference.”

Khan had accused opposition parties of conspiring with foreign powers to overthrow him. He spoke explicitly about an alleged involvement of the United States in such a plan.

On Monday, during a speech broadcast live by Pakistani television on Monday, he stated:

“The MPs who have become part of an international conspiracy to overthrow the government only care about their personal interests and will no longer be accepted in politics.”

Washington denied that the US is trying to overthrow Khan’s government.

More on the subject – Pakistani PM Khan: ‘Foreign power wants to overthrow me’