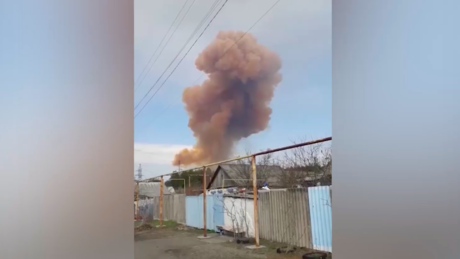 Ukrainian nationalists used hydrochloric acid as a chemical weapon in a terrorist attack against civilians by blowing up a reservoir at a factory while retreating from Rubeshnoye. The resulting aerosol cloud endangers the surrounding residential area, according to the LVR People’s Militia.

Hydrochloric acid dispersed in the air by means of an explosion – as a weapon for a terrorist attack, it can certainly be a nightmare for those affected. Carrying out such a terrorist attack on civilians under false flags, throws the People’s Militia of the People’s Republic of Lugansk the nationalist paramilitary associations in front:

“Aware of the futility of their combat operations against the People’s Republic of Lugansk, Ukrainian nationalist units before withdrawing from the occupied city rubezhnoe started destroying facilities in the chemical industry.

So, today, by detonating a cistern with hydrochloric acid in factory No. 1 of the production association ‘Zaria’, a cloud of this poisonous substance was spread in the city’s factory district, where more than 10,000 people live.”

The people’s militia stressed that the nationalists were by no means “only” concerned with the simple destruction of industrial capacities in an area they were to evacuate:

“The timing of the detonation was chosen taking into account the direction of the wind, which spreads the chemicals across the liberated area of ​​​​the LVR towards the settlement of Kudryazhovka.

These acts of terrorism could result in numerous civilian casualties.”

In addition, the departing nationalists expressly prohibited the civil protection forces and other emergency and rescue services on site from carrying out work to contain the respective sources of contamination.

The number of possible civilian casualties is currently being clarified.

The Ukrainian media are currently trying to attribute this terrorist attack to the People’s Militia of the People’s Republic of Lugansk:

“Currently, the Ukrainian media are actively spreading false information about the alleged involvement of units of the LPR People’s Militia in this demolition.”

The people’s militia warns of further possible such explosions in the factory area – given the quantities of acids stored there, the deaths of literally hundreds of thousands of civilians in the area could result:

“More than 40,000 tons of sulfuric acid, hydrochloric acid, nitric acid and ammonia are still stored in tanks on the premises of the chemical plant for the production of explosives. Their detonation would cause irreparable damage to the environment of the region and wipe out all life within a radius of 30 kilometers. that are still under the control of Ukrainian forces – such as Lisichansk, Severodonetsk, Zolotoye and Seversk – are home to more than 300,000 civilians.”

More on the subject – Butscha massacre: White armbands lead to the perpetrator – perhaps also to the motive