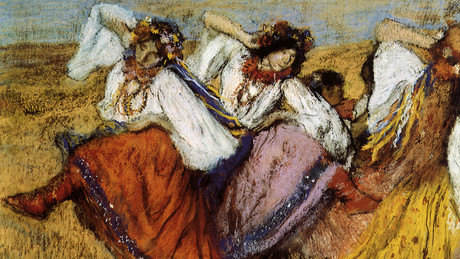 Against the background of the Ukraine war, the National Gallery in London has renamed the painting “Russian Dancers” by the French painter and sculptor Edgar Degas. His work of art is now called “Ukrainian Dancers” on the museum’s website.

The British National Gallery in London has a pastel painting of Edgar Degas renamed without further ado from the 1890s. As of last week, the work of art is no longer called “Russian Dancers” but “Ukrainian Dancers”. The picture shows dancing women in long skirts and white shirts. In addition to floral decorations, they apparently also wear hair bands in their hair – in the national colors of Ukraine, yellow and blue.

A spokesman for the National Gallery told the Guardian that the painting’s name had been a constant topic of discussion for many years and was also discussed in the art scholarly literature. Due to the current situation, it has increasingly come into focus in the past month. “So we felt it was a good time to update the name to better reflect the subject of the painting,” he explained. The dancers “are almost certainly Ukrainians rather than Russians”, reads now the description on the website of the gallery.

The newspaper also quoted Olesya Chromeychuk, historian and director of the Ukrainian Institute in London. She lamented that for many years exhibition curators in Britain “had no problem portraying Jewish, Belarusian or Ukrainian art and artists as Russian”.

The renaming campaign was led by Ukrainian artist and activist Mariam Naiem. She wrote on Facebook that she had contacted several western art museums and asked for changes. She described the move by the National Gallery as a first “micro-victory”.

Mikhail Shvydkoi, Russia’s commissioner for international cultural policy, reacted sharply. According to him, the step is an example of “political cretinism”. He added that the incident could be seen as an infringement of an artist’s copyright and evidence of myopia.

Earlier, Italy’s University of Milan-Bicocca announced that it was canceling a course on the writer Fyodor Dostoyevsky and instead focusing on Ukrainian authors. The news triggered a violent backlash, and the decision was subsequently reversed. The Cardiff Philharmonic Orchestra removed all pieces by Pyotr Tchaikovsky from its concert program because the orchestra considered this world-famous 19th-century Russian composer “problematic”.

More on the subject – Finland: Customs confiscate artworks from Hermitage and Tretyakov Gallery