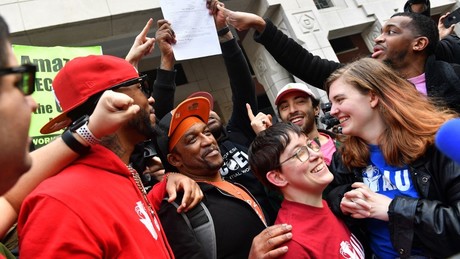 It is indeed a “historic victory” for Amazon employees in New York: for the first time in Amazon’s history, the employees of the US online retailer at the Staten Island site voted 2,654 to 2,131 by a majority and were thus successful in founding a union at Amazon in the US.

Amazon workers in New York have voted to form a union. After the success, the union leaders spoke of a “historic victory” against the second largest employer in the USA. In the New York borough Staten Island 2,654 warehouse workers voted to form a union, while 2,131 of those employed there voted no, according to the Federal Labor Relations Administration to implement key US labor laws”National Labor Relations Board” (NLRB) announced.

Meanwhile, Amazon workers in Bessemer, Alabama, voted against such a formation in another union poll — but there, too, pending clarification on contested ballots could still change the outcome. The vote in Bessemer was against a union by 993 to 875 votes. A hearing to review a whopping 416 contested ballots is expected to begin in the next few days.

The Staten Island victory marks the first successful attempt at unionization by US Amazon workers in the company’s history. The organizers had to endure an uphill battle against management at global company Amazon, which now employs over a million people in the US and is doing everything it can to keep unions out. The nascent Amazon Labor Union (ALU), which led the Staten Island push, has no support from any of the mainstream unions and is backed by former and current warehouse workers.

In a report released late last week, Amazon disclosed that it spent about $4.2 million last year on so-called employment counselors, which organizations say the online retailer routinely uses to convince its workers not to leave to unionize. It’s unclear how much the company plans to spend on such “services” in 2022.

“As a company, we don’t believe that unions are the best solution for our employees,” said an Amazon spokesman. “We remain focused on working directly with our team to continue making Amazon a great place to work.”

More on the subject – To ensure raw material supplies: Gates and Bezos promote mining in Greenland