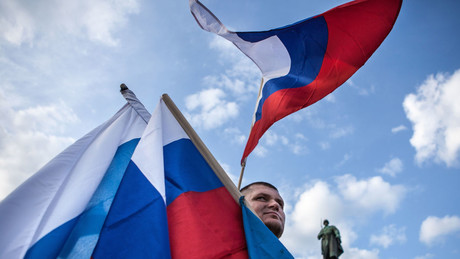 Berlin’s governing mayor Franziska Giffey (SPD) commented on the “pro-Russian” motorcade in Berlin in the ZDF morning show on Tuesday. In response to the provocative question of the visibly outraged ZDF presenter Dunja Halali, the politician differentiated. She recalled that the interior senator classified the Z sign as a “symbol of support for aggressive war” and banned it. Showing this sign will be prosecuted.

In the car parade, the few vehicles on which the Z sign was attached were recorded by the police and criminal proceedings were initiated, said Giffey.

On the other hand, “pro-Russian demonstrations” and the display of the Russian flag fell under the freedom of assembly and could not be banned, emphasized the Governing Mayor. And further:

“We support this, we are very much against any form of aggressive war support, it will also be prevented, it will be prosecuted. But we cannot simply ban a registered demonstration under the motto ‘Against discrimination against Russian-speaking people’. It falls under the freedom of assembly. We pursue what is criminally relevant.”

On Sunday, people with around 400 cars took part in a demonstration drive through Berlin. They protested against the increasing discrimination and hostility towards Russian-speaking fellow citizens in Germany. The participants decorated their cars with Russian flags, but also with flags of other former Soviet republics or even the Soviet Union. Signs carried read, among other things, “Stop hating Russians” and “Our children are afraid to go outside”.

About the meaning, inventor and history of the “Z” symbol, RT DE reported on March 10. Its use in Germany may be a punishable offense under Section 140 of the Criminal Code – at least this is the view held by the public prosecutor’s offices and the interior ministers of almost all countries. However, there are currently no court decisions on this.

More on the subject – At some point, the collar bursts: How far does the patience of the Russian-Germans go?