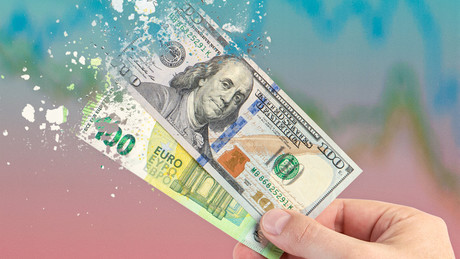 Western sanctions against Russia have resulted in a significant loss of prestige for the US dollar and euro. This was announced by Kremlin spokesman Dmitry Peskov. A process is underway that will replace the US dollar-based financial system.

The prestige of the US dollar and the euro has been “severely shaken” by the sanctions imposed on Russia. These would now prompt more and more countries to switch to national currencies when settling accounts with foreign partners. This was pointed out by Dmitry Peskov, the press secretary of the Russian President. In an interview with the Belarus-24 TV channel, he said:

“Indeed, against the backdrop of these rogue sanctions games, the prestige of the US dollar and the euro has been shaken.”

Above all, the role of the US dollar as the main reserve currency is affected. More and more countries would use national currencies for mutual settlements. Peskow emphasized that this process is in its infancy and cannot be stopped.

The official added that the entire Bretton Woods system “that enabled America to sit at the top of the world’s economic pyramid for decades is now beginning to erode.”

The Bretton Woods system created a collective international exchange rate system that pegged currencies to the US dollar, which in turn was pegged to the price of gold. This effectively made the US dollar the world’s main reserve currency. But now, according to Peskow, this system will be “completely washed away” as countries “shift their relationships to national currencies” and this practice will expand.

According to the spokesman, the world will benefit from this change. He realized:

“There are many opportunities here, and all of this is a prototype of the future economic system that we are witnessing the emergence of.”

Although settlements in national currencies existed before, they were not widespread. However, last month a number of Western countries, including most EU countries and the US, imposed sanctions on Russia in retaliation for the military operation in Ukraine that began in February.

As part of the sanctions, much of Russia’s foreign assets were frozen and the country was cut off from the SWIFT messaging system. This threatened Russia’s ability to make payments to foreign partners in euros and US dollars. In response, Moscow announced last week that it would change payment mechanisms for exports to “unfriendly” countries that have sanctioned Russia. Natural gas is the first to be affected by the changeover.

Buyers are now required to set up ruble accounts with Russian banks in order to make payments to Russian gas suppliers in local currency. In addition, Russia has held talks with a number of foreign partners, including India and Turkey, on setting up payment mechanisms in their respective national currencies to bypass the US dollar and euro, the reliability of which is now at risk.

Peskow said these moves are just the beginning of a broader shift. While Russia is only changing the payment method for its natural gas exports and only with countries considered “unfriendly” for the time being, the move itself sets a precedent that can be imitated in other sectors and with other partners.

More on the subject – A bursting of the US debt bubble will hit the world badly, but not Russia