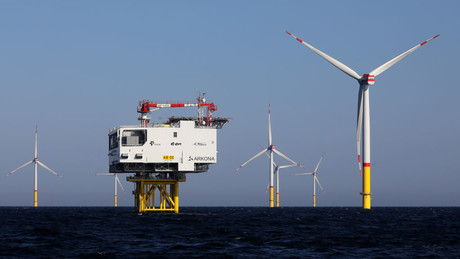 A subsidiary of Siemens Energy begins construction of the company’s largest wind turbine to date in Denmark. The wind turbines are intended for offshore wind farms. The turbine will be able to cover a wind area of ​​43,500 square meters.

Siemens Gamesa Renewable Energy (abbreviation: Siemens Gamesa or SGRE) is an internationally active and listed manufacturer of wind turbines with headquarters near Bilbao in Spain. The company is a subsidiary of Siemens Energy based in Munich. The Spanish-German cooperation announced that it had started production of its largest system to date at the group’s own factory in Aalborg in the north of the Danish mainland.

The wind turbine that the designation SG 14-236 DD has a rotor diameter of 236 meters and thus replaces the previous product SG 14-222 DD, which has a diameter of 222 meters. The individual rotor blades are 115 meters long. The advertising slogan is: “The wind of change. Stronger than ever before!”

“Given the growing need to meet the challenges of climate change, we are more dependent than ever on the winds of change. The SG 14-236 DD is the next step on the way to this goal: With an output of up to 15 megawatts with Power Boost we offer proven technology to provide sustainable energy.”

According to the company, the turbine should be able to cover a wind area of ​​43,500 square meters. The nominal output is 14 megawatts, the peak output of up to 15 megawatts is the corporate goal. Series production is planned for 2024. With regard to technical details, the company website says: “At wind speeds of more than 25 meters per second, wind turbines usually switch off to protect themselves.” This information is of interest because wind turbines of this size are only installed in so-called offshore wind farms.

Offshore wind farms are erected in the offshore areas of suitable seas. Of the ten largest offshore wind farms in the world there are currently six in British waters, as well as in the Netherlands, Denmark and Belgium. The currently largest German offshore wind farm, Hohe See in the North Sea, ranks 14th on the list. “Siemens Gamesa wants to complete the first of the 236-meter wind turbines this year. At the end of the year, the prototype should be on the Østerild wind turbine test field be set up on the north coast of Jutland”, according to information from a golemarticle.