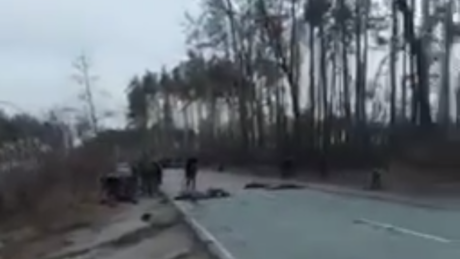 Ukrainian nationalists are often not ashamed of even the most heinous acts. Executions and torture are filmed in gruesome detail and the videos then circulated publicly. So far, the world has only known something similar from the “Islamic State”. This also explains the accumulation of such execution and torture videos that are currently coming out of Ukraine. This type of videos already existed at the “Euromaidan” 2013/2014 and in times after, but in times of war the volume increases massively.

On Monday, a video appeared on social networks that is so horrific in its cruelty that RT DE will not publish it in an abridged and pixelated form, but only wants to describe it here.

At the beginning the camera is focused on a uniformed man with a white armband lying on a country road. The body, presumably male, is already lying in a pool of blood. The blood, fresh, cherry red, has already spread in two directions, already several meters in the direction where the camera is looking. A helmet lies in front of the body, behind him – with his back to the camera – another body, lifeless, in a pool of blood.

The body lying in front appears to have no head. The head is probably snapped off, hidden somewhere in the depths of the yellow-green military jacket. But the body is apparently still alive, trying to get up, leaning on the arm with the white bandage. You hear loud rattling.

a male voice speaks in the background. Again you hear a rattle, almost like snoring.

A gun barrel slides into the picture from the right, then a shot. one more shot

The body twitches and rattles loudly again. The camera pans further to the left, you can see the feet of the body. Tied up with a pink material. Or was the material once white and absorbed blood that had flowed to the legs from what was once the neck, the head, the pharynx?

The pool of blood is wide, taking up almost a third of the picture.

“But the gloves are good”,

says another voice in the background.

Snoring, rattling, croaking can be heard again. The body twitches in agony. Another shot, the barrel of the gun jumps through the picture and disappears again at the top right.

Silence. The camera pans to the left. Now you can still see two bodies on the asphalt, on the opposite lane. One body lies on its stomach, face down, away from the camera. The arms are tied behind the back. Dark green uniform. A pool of blood spreads out from the face, resulting in a puddle a good one meter in diameter. The blood is less fresh, it is drying, but daylight still reflects on it.

The third body lies on its back, face up, its right arm stretched over its head. As if he were sleeping. But he’s not sleeping, he’s already dead. There’s also a pool of blood underneath him. The uniform is also soaked in blood in the abdominal area.

The camera pans over both bodies:

“There they are, the little protectors. Russian army”,

says the voice that was heard at the very beginning.

An engine howls. Probably that of a chainsaw. He chokes and howls again. The camera pans the other way, you can see something burning and the voice behind the camera confirms this.

The camera pans down and up to a bearded face, black eyes, Caucasian features:

“Glory to the heroes!”

Pan to the left, the focus of the camera is now an armored transporter. On the left in the middle and on the left at the rear is a large “V” painted in white. There is a blue water gallon on the transporter, still full. The voice behind the camera:

“And these are our trophies.”

Another engine howls, this time not stalling. The camera pans across the country road, the trees on the side of the road, and a wide field behind them. Stay for a few moments in this almost idyllic landscape. Swings back and forth uncertainly. Then left, back to the scene of the bloody incident. You can now see the four lifeless bodies, to the left of the road surface a fresh track of the armored car has burned into the ground. Above the corpses three, four, five, maybe six armed figures, gun barrels pointing down. The engine howls, hums, rattles. Camera pans across the entire scene, another pan, another pan: fire further down the road, green armored car with the white “V” painted on it and the water gallon on it, a tree stump the size of a man, three, four, five armed men, four corpses on the asphalt.

One of the gunmen holds up gloves in his left hand. In the right a smartphone. Trophies?

“Sanja” runs towards the end of the film, steps into the three meter long pool of blood:

The camera pans back to the lifeless bodies. Now you can see the face of the person who was still gasping two minutes ago with his back to the camera. Short haircut, fair skin, pointed nose. Young. A white bandage on his right arm.

Now another man breaks away from the group and approaches the camera. Grey-green fabric hat, short gray beard, narrow eyes and crooked nose:

What happened here reads like this in the sober language of the officials from the Russian investigative authority:

“A video was released on the Internet showing the killing of Russian prisoners of war by Ukrainian nationalists. The video also shows the shooting of a dying Russian prisoner. One of the deceased had his hands tied behind his back, suggesting that the soldier died not during a combat mission, but already in captivity.The video was filmed in the Kyiv region.

As a result of these criminal acts, soldiers of the Ukrainian Armed Forces and other Ukrainian military units have blatantly violated the Geneva Convention on the Treatment of Prisoners of War.

The Russian investigators now know a few details: The crime happened in broad daylight on March 30, while the Russian troops were still withdrawing from the Kyiv area. The crews of two armored transports of the Russian airborne troops were ambushed. Some of the crew members were killed by IS Islamists in the style of cutting their throats.

The three perpetrators who showed their faces in the video have now been identified by name. These are (in the order of their “appearance” in the video) the fighters of the “Georgian Legion” Teimuras Chisanshvili, the Kievan Aleksei Antonyuk (“Sanya”) and one Aleksei Kuzirin.

Observers could ask themselves two questions here: Will the perpetrators ever receive the punishment they deserve? And… would these three hesitate for a second to shoot civilians wearing white armbands?