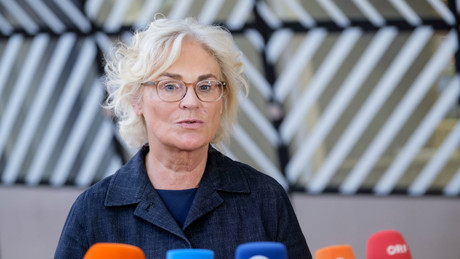 The opposition parties CDU and CSU are increasingly calling for the dismissal of Defense Minister Christine Lambrecht. The background is their reluctance to deliver heavy weapons to Ukraine.

After CSU boss Markus Söder, the deputy chairwoman of the CDU/CSU parliamentary group Andrea Lindholz is now also calling for the resignation of the Federal Minister of Defense Christine Lambrecht (SPD).

“Ms. Lambrecht cuts a very unhappy figure, and it also damages our reputation. When it comes to arms deliveries, she is more than unhappy. In that respect, I can understand his request, yes,”

said Lindholz in the ntv early start. The Federal Minister of the Interior and for Heimat Nancy Faeser does not get good marks from Lindholz either:

“She is acting too late in many places in refugee policy. But there is no reason to demand her resignation.”

The Bavarian Prime Minister Markus Söder (CSU) had previously called for Lambrecht’s dismissal on Monday. After a video conference of the CSU party executive, Söder said that the defense minister was “completely overwhelmed”. With regard to the deliveries of German weapons to Ukraine, he spoke of a “disgrace” and called on the federal government to urgently deliver more. According to participants, Söder had said in the switching conference that Chancellor Olaf Scholz (SPD) had to “actually make a cabinet move” in order to exchange Lambrecht.

Söder, on the other hand, calls for an expansion of German arms deliveries to Ukraine.

The Federal Chancellery and the Ministry of Defense have not yet issued any statements on the demands for resignation and dismissal.