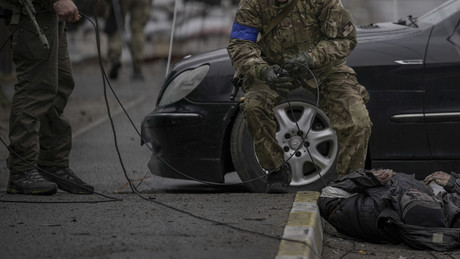 The Russian Defense Ministry has already issued a statement classifying the Bucha massacre as a staged false flag operation.

The First Deputy Information Minister of the People’s Republic of Donetsk, Daniil Bessonov, has now also provided further arguments as to why the “Bucha massacre” can only be a provocation. In addition, the political activist Pavel Gubarev, known at the time as the “People’s Governor of Donbass”, and the war correspondent for Komsomolskaya Pravda Alexander Koz provide further information on the possible real reason for the massacre and how it happened.

Daniel Bessonov related In his assessment of the video materials released by the Ukrainian Defense Ministry, he relied on the most obvious and common sense of how one should work in a war zone. First of all, he found it extremely strange that the pictures from Ukraine show people walking en masse in the streets – which is really not to be expected when there is active fighting in the immediate vicinity. But this is exactly the impression the pictures give:

“In the image and video materials provided by the Ukrainian side, we can see that several streets along the route are littered with corpses. It gives the impression that it was a peaceful city, people walked one by one Work, others wherever… And even for a peaceful city in peacetime, the crowd and concentration of people was very strange, as if the whole street had come out of the houses – and exclusively the male part of the population – to watch a firework or a There were far too many, it’s immediately obvious. And the city has been fighting for more than a month, in the city itself – and everyone knows it, the whole city. Nobody would be in an active combat zone without it urgent need to leave his basement or his house.”

With his interpretations, Bessonow also suggests a direction in which possible future investigations should clarify these events.

First of all, the bodies in the pictures could be corpses of militia officers from the DPR and Russian, but maybe also Ukrainian soldiers. It would not have been impossible for the Ukrainian military to get hold of all of them, especially in Bucha – because the troops of the DPR and the Russian Federation never had complete control of the city. In plain language: active fighting took place there for more than a month, according to Bessonow:

“The front line ran through the middle of the city, so that’s clear, in other words, there were active clashes there.”

The Deputy Information Minister also found it important to emphasize that all the bodies in the pictures are men of military age – and strictly speaking, it is impossible to know whether all the bodies are really corpses, i.e. dead bodies:

“We don’t know – are they corpses, are they extras, or is it something else? But they are bodies of draft-age males. The faces of the ‘corpses’ were not shown.”

Besides the rather odd fact that no faces of the suspected dead are shown, there are almost no bloodstains on the clothes or around the bodies, as the politician points out attentive power.

In the absence of real war crimes on the part of the Russian troops or the militias of the two people’s republics of Donetsk and Lugansk, the Kiev regime, just like Western power pullers, could certainly have an interest in helping out themselves if necessary and staging images that are effective for the media. argued Bessonow:

“They have to condition public opinion. And they are not primarily interested in the opinion of Western journalists or Western politicians, who have long since signaled their aggressive position towards Russia. They are doing this to improve public opinion among ordinary people Shaping people in the west, so that these ordinary people understand what the western states are for [der Ukraine] help – with weapons, with mercenaries, with money and so on.”

Western governments are so interested in such fakes of any kind that Ukrainian specialists in psychological warfare were trained by Western colleagues to produce such hoaxes, the DPR’s deputy information minister reminds:

“They first created and financed these centers of information and psychological warfare, they trained them in correct information warfare – and it is in the interest of their western colleagues, above all, […] that the ordinary people there see in Russians some kind of barbarians and murderers who are allegedly subjecting the people of Ukraine to genocide there.”

More on the subject – The human spirit as NATO’s new “defense doctrine”.

The involvement of Western intelligence agencies in the establishment of Ukrainian psychological warfare centers reported at that time already the Belarusian secret service KGB. Since, according to data from Belarus, these centers are subordinate to the SBU, the CIA must be meant above all, whose domestic branch, according to an insider, has long since become the SBU.

with such tactics fell in recent history in another conflict zone, namely Syria, already another western state on – Great Britain. And all of this, for all we know, is part of a NATO-wide, broader campaign of psychological warfare and influence, not just on respective areas of interest of the West aims outside its sphere, but above all also and straight to the people in the west itself.

However, those bodies in the photographs that are wearing civilian clothes and white ribbons around their upper arms – and there are a lot of them – can by all appearances really be counted among the dead. this explained the war correspondent for Komsomolskaya Pravda Alexander Koz (who also reported from Bucha himself in February 2022). reference on the Ukrainian blogger Vladimir Sklyarov, who lives in the city: When they marched into Bucha, very well-equipped Russian infantry troops approached Sklyarov. He and all other civilians should hang white bed sheets out of the window to better protect their residential buildings from being shelled by Russian troops. The Russian soldiers urged Sklyarov to pass this signal on to all civilians. Here is Sklyarov in full:

“They said, ‘Tell everyone that we won’t harm anyone. They should hang white sheets out the window so we can see that there are civilians living there. They should keep quiet and hide in basements or whatever you have there. We’re just shooting at Nazis and Bandera disciples.'”

With this simple guideline, the civilian population of Bucha seems to have fared so well during the more than month-long fighting for the city that many went a step further. As is well known, Russian vehicles in Ukraine are emblazoned with white letters, such as the Z, as well as letters such as V, O, A and X, depending on the areas from which the troops entered Ukraine and their affiliation; all letters now and then also in a white rectangle. Similarly, foot troops on both sides quickly got used to putting on arm and knee bandages to distinguish between the sides. These are yellow or blue for Ukrainian troops, in their flag colors for the militias of the Donetsk and Lugansk People’s Republics, and in white for Russian soldiers; some members of Russian special forces also prefer to wear the striped George’s ribbon in orange and black. Now some townspeople of Bucha also adopted the practice of white armbands. Some did so to show their support for Russian troops, Koz said.

“Most of those killed have white armbands on their sleeves – one a ribbon, another a piece of bandage, the third simply a rag. A white armband is the identifying mark of the Russian troops. Nobody forced the residents to wear them, they did so of their own free will Pieces done to mark themselves – as ‘here are friends’.”

At this point, however, the suspicion also arises that some of them acted in this way in order to mark their status as civilians with white bed sheets on the go, expanding the practice.

In any case, this practice seems to have ended up fatal for some residents of Bucha (but possibly also other towns in areas that were evacuated by Russian troops). They didn’t take off their armbands even after the Russian troops left because they hid in their basements for several days afterward from artillery fire from Ukrainian troops, who may not have known about the departure of Russian troops either, Koz said .

similar White Pavel Gubarev from other places in the area too to report – the well-known political activist and at the time “People’s Governor of the Donbass” fights currently in Ukraine as a private in the Russian armed forces in the position of a gunner and loader for an air defense system. According to his own statements, he was traveling in the greater Kyiv area from March 2nd to March 31st, where Butscha is also located. He speaks of a routine practice of civilians marking themselves in public spaces with white ribbons and the like, and lists some of the places where he was able to observe this:

“In all the towns controlled by our military, civilians were moving through the streets with a white ribbon on their left arm. I saw it in Ivankov, Krasny Rog, Maryanovka and other places where we went on combat missions.”

Gubarev also put forward a working hypothesis similar to the one above, according to which Ukrainian soldiers and members of the nationalist battalions shot at the civilians, initially either in confusion because they might not pay attention to the uniforms or lack of them, or thinking they were a collaborator with the Russian troops to be punished. They then misused the corpses as props for their macabre staging:

“I suppose the following happened: after the withdrawal of the armed forces of the Russian Federation from this combat zone, according to the results of negotiations in Turkey, the Ukrainian armed forces began to move into towns and villages – and inadvertently opened (but I also conclude Not intentionally) firing at men with white ribbons around their arms. This happened en masse. And when they understood that they were mass murdering civilians, they decided to portray this crime in turn as a misdeed by the armed forces of the Russian Federation.”

The intention behind such actions on the part of the Ukrainian forces – at least in some cases – is illustrated by the video footage of the notorious Ukrainian nationalist “Boatswain” recorded in Bucha testifieswho even gives his comrade explicit permission, if not instructions, to shoot at any men who do not wear blue armbands like the Ukrainian troops (found under the “Telegram” link as the second clip).

More on the subject – Media report: Acts of violence by the Ukrainian secret service and military against the civilian population