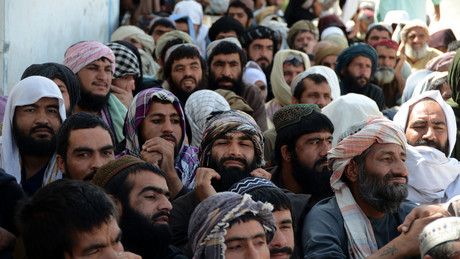 94 percent of those taking part in a poll by the US polling institute Gallup in Afghanistan stated that their living conditions are so bad that they “suffer”, as the company said in a statement on its website. This figure represents a record not only for Afghanistan, but for all states in which Gallup conducts similar surveys since 2005. Respondents had the opportunity to rate their current and future living conditions on a scale from zero to ten. Those who scored four or fewer are classified as “suffering.”

Gallup conducted the poll as the radical Islamist Taliban militia took power and the remaining US troops left the country. According to surveys from previous years, the number of Afghans who describe their own living situation as catastrophic has been increasing since 2016. While the number of Afghans who described their living situation as good has not exceeded 12 percent since 2006, the proportion of those who assessed their situation as at least mediocre has shrunk from 82 percent in 2006 to six percent in 2021.

Sorted by income, the poorer sections of the population have a particularly pessimistic assessment of their current and future living situation. The poorest and second poorest 20 percent of survey respondents reported suffering 100 percent and 99 percent, respectively. But even among the more affluent, the situation is not much better: 86 percent of the richest 20 percent of respondents also said they were suffering.

After the Taliban took power in August last year, western countries introduced far-reaching sanctions against Afghanistan. The US had even confiscated assets worth $7 billion from the Afghan central bank. China, Russia and other countries have repeatedly criticized the West’s blockade policy on Afghanistan and called for normal economic relations with the country to be enabled and for additional humanitarian aid to be sent to Afghans in order to avert an impending humanitarian catastrophe. Western countries occupied Afghanistan from 2001 to 2021.