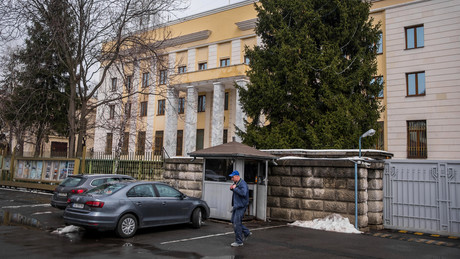 A car crashed into the fence of the Russian embassy in Bucharest on Wednesday morning and burst into flames. According to the Romanian police, the driver died. The authorities have started the investigation. The circumstances are currently unclear.

According to Romanian police, a car drove into a fence surrounding the Russian embassy in Bucharest in the early hours of Wednesday morning. The vehicle immediately caught fire. The authorities also say that the car did not enter the embassy premises.

Videos have surfaced on social media claiming to show the incident. For example, video shows the front of the car bursting into flames while the vehicle remained trapped in the gate. Security personnel rushed to the scene but were unable to help the driver.

According to the authorities in the Romanian capital, the fire brigade has now been able to extinguish the fire. However, the driver died at the scene of the accident.

According to the Reuters news agency, it was not immediately clear whether this was an accident or a deliberate collision. The police said they were investigating. The driver’s identity was not released. No information was given on a possible motive or other details about the incident either.

Since the start of the war in Ukraine on February 24, demonstrations have repeatedly taken place in front of the embassy building in the Romanian capital, demanding “an end to the Russian attack”. Romania also expelled ten Russian diplomats on Tuesday. According to the Foreign Ministry in Bucharest, the diplomats violated the 1961 Vienna Convention on Diplomatic Relations.

More on the subject – Former UN weapons inspector: Bucha is useful to the Ukrainian government