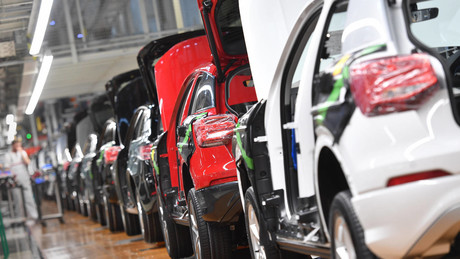 The topic just hit the news: the number of new car registrations is miserable. They are usually a good economic barometer; when they fall, other economic indicators also fall.

According to the Federal Motor Transport Authority, 17.5 percent fewer vehicles were registered in March than in March of the previous year. March is usually the busiest month over the course of the year. In January and February, the values ​​of the previous year were exceeded.

However, 2021 was by far one of the worst years in a long time. The total number of new registrations was 2.62 million cars. In 2019 it was 3.61 million, in 2020 it was 2.92 million. Before that, the number fluctuated more or less strongly around three million annually. The outlier was 2009, when the economic stimulus package known as the “scrappage bonus” after the outbreak of the banking crisis temporarily boosted sales.

However, if you want to know how the number of cars currently sold in Germany relates to the production capacities, you have to refer to the year 2019. And even if 17.5 percent already sounds like a massive slump, the result there is even grimmer. If the registration figures for the whole year continue the development in March, we are talking about annual registrations that are a full 40 percent below those of 2019.

Of course, losses are not evenly distributed; company cars have slumped more than private cars, and while Opel and VW each have over 30 percent fewer registrations in the last month, figures for passenger cars from two manufacturing countries: the US and Romania have risen. The Dacia brand is therefore benefiting from the current development. But it is quite clear that a slump of this magnitude in new car sales must have consequences for employment.

Incidentally, since the beginning of the millennium, more passenger vehicles have been registered commercially than privately, and they now account for almost two thirds of the total number. Sales of company cars are usually more stable than those of private vehicles because many companies have leasing contracts and therefore renew their fleet at regular intervals. If demand collapses in this area, it is either due to the uncertainty triggered by the propagation of e-cars or because the companies themselves have to make savings in this area. This would again be an indication that there are overall economic problems. However, this would mean that the figures for private vehicles would follow with a certain delay once the consequences of these problems had reached the private vehicle owners. So everything points to a further decline.

Another factor is delivery issues. This can lead to some people wanting to buy a car but not being able to find it. If you look through the offer on the website of Apl.de, a provider of discounted new cars, you will find that there are enormous gaps in some entire brands; at Ford, for example, “currently not available for order” is the standard answer. But those are still the problems caused by missing components. In the near future, thanks to sanctions against Russia, steel and steel additives such as nickel and chromium will become problematic. Not to mention that increases in food and energy prices will lead to shifts in customer budgets, which will then also cause private registrations to collapse.

Incidentally, this development does not only affect Germany, but all of Europe, and the decline is already stronger than as a result of the financial market crisis in 2008, which brought global trade to an almost complete standstill for some time. So there is no need to harbor hopes of boosting Germany’s economic engine, vehicle construction, through exports.

More on the subject – Do the lights go out then? Economics Ministry warns against boycott of Russian hard coal