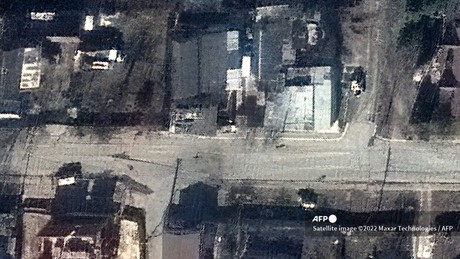 Satellite images are presented in Western media as evidence that the bodies in Bucha were already lying on the streets on March 19. However, this “evidence” tends to cast doubt on the portrayal of Ukraine.

An analysis by Bernd Murawski

Maxar Technologies satellite imagery is in Western media presented as evidence that the bodies were already lying on the streets on March 19. However, this “evidence” tends to cast doubt on the portrayal of Ukraine.

For the period between March 30th and April 3rd there is at most Hints, who could be responsible for the murder of the people on Yablunska Street. Only after a forensic examination of the dead and a questioning of local residents and other witnesses will it be possible to name a culprit. However, if the bodies were in the same place on March 19 or earlier, then this affects the credibility of the versions put forward by both sides.

It seems extremely strange that the dead were not removed and buried within the two weeks available. They weren’t even covered like in other theaters of war in Ukraine. The area was apparently inhabited at the time, and shelling was sporadic, as evidenced by the largely intact buildings (unlike Mariupol, for example). Did the dead have no relatives? Or did no one else see the need to remove the corpses, if only for reasons of hygiene?

the temperatures were in positive territory throughout the second half of March and rose well over ten degrees during the day. Show that the decomposition process after only one week does not leave much of a person’s appearance pictures on a relevant Wikipedia page. The corpses, as far as one could tell, looked quite fresh, as if they had died only a few days ago.

These doubts are not intended to deny credibility to Ukrainian claims of atrocities committed by the Russian side elsewhere. Not only in the Ukrainian Azov battalion, but also in the Russian units, arch-nationalists are fighting, who are difficult to rein in. Likewise, the Kadyrov troops was repeated accusedto disregard internationally recognized rules of warfare. However, it seems highly unlikely that – if the perpetrators of Bucha belonged to the Russian army – the traces were not removed. Especially since some bodies were tied up and shot in the neck, which is a clear war crime. There was enough time to clear the crime scene, and word of the event would certainly have spread. Nevertheless, the mayor should have known about it, but this was not mentioned in his speech of April 1st.

So are the satellite images manipulated? Russian journalist Alexander Nezorov, who condemned his country’s military action, considers the images to be genuine given his own experience. As proof of their authenticity, it is also stated that Maxar Technologies would otherwise jeopardize the company’s reputation. Confirm that a forgery is easily possible Image Editing Experts, especially since satellite images have a weak resolution. If an image manipulation should actually be proven, then this information will hardly reach the general public. If so, the company could expect sympathy and understanding given the current mood.

Finally, it should be emphasized that proof of targeted post-processing of the satellite images does not automatically mean that the Russian representation is correct. One-sided reporting, distortion of facts and outright lies are part of any war propaganda, on both sides. It is to be hoped that the truth about the Bucha murders will be made public. However, it is to be feared that the prejudice against Russia in the West will result in a non-partisan investigation not possible power.