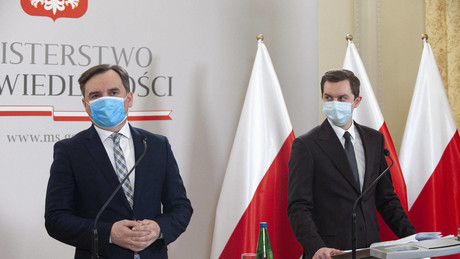 Olaf Scholz looked with pride at the global minimum tax for corporations, which many EU countries agreed to in one form or another. But Poland thwarts the plans of the EU Commission. Unfavorable for France, which holds the presidency of the Finance Council, just before the elections.

It was also a prestige project by Olaf Scholz: the global minimum tax, which he had advocated in his role as finance minister. With its right of veto, Poland has thwarted the EU’s long-prepared plans to implement the international minimum tax.

Last year, 131 countries around the world agreed on a tax rate of at least 15 percent for internationally active companies and on a redistribution of taxation rights in order to curb international tax competition and tax evasion by companies.
In Germany alone, according to the tax justice network, the tax authorities lose around 30 billion euros every year through the shifting of profits by multinational companies, as well as 10 billion euros through illegal assets in shadow financial centers.

All EU member states had approved the tax agreement, which is why the European Commission presented a proposal in December so that the minimum tax would be implemented uniformly throughout the EU. The reform should come into force in 2023, according to which corporations with at least 750 million euros in sales per year not only pay taxes in their home country, but also in the so-called market states – where most sales are generated – so that emerging countries would have higher revenues.

According to the Commission, another part of the global tax reform should be fleshed out with a legislative proposal later in the year. It was about international digital companies such as Apple, Facebook and Amazon, which should therefore not only be taxed in their home country, but also where they actually do business.

With reference to this second pillar of the agreement, Poland has exercised its veto and insisted on linking both parts by law – even if there is only a legal text in the EU for the first part with the 15 percent.

“Both pillars should be handled as one package. We have to stick to our goal, the international [Steuerabkommen] fully implemented in order to cope with the fiscal policy challenges arising from the digitization of the economy,” explained Polish State Secretary Magdalena Rzeczkowska. Firm assurances that the second part would follow were not enough for the government in Warsaw, explained French Finance Minister Le Maire on Tuesday.

France currently chairs the Fiscal Council but has now failed to score with a result ahead of the elections. Le Maire was upset. The reasons why Poland rejected the law are a “mystery,” he said. “I just want to tell you that we have answered all the technical concerns raised by Member States.” Estonia, Malta and Sweden, who still had reservations up until March, ultimately had no objections. They also responded to Poland’s concerns. “So there must be another reason, a reason that I don’t know,” said Le Maire.

In doing so, he indicated, without specifying, what apparently some authorities in Brussels are now accusing Warsaw of. The EU Commission had decided to withhold EU funds from Poland, partly because of the lack of independence of the Polish courts and other concerns about the rule of law. Against this background, the Polish Justice Minister Zbigniew Ziobro had already threatened the right-wing party Solidarna Polska in December last year that Warsaw could veto all EU matters requiring unanimity. This is the case with tax issues.

More on the subject – Profiteers of the Corona crisis: Amazon is making profits like never before