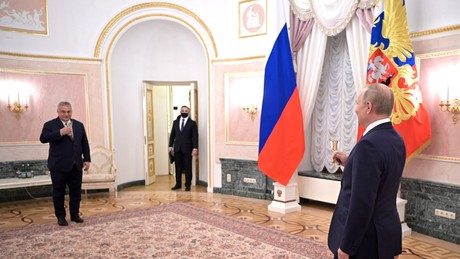 Hungary’s Prime Minister Viktor Orbán has broken with the EU and said he will pay for Russian gas in rubles. Slovakia had also indicated this path after other EU states had refused to comply with Russia’s demands.

Unlike the rest of the EU, Hungary has agreed to pay in rubles for gas supplies from Russia. This was stated by the recently re-elected Hungarian Prime Minister Viktor Orbán to the press in Budapest on Wednesday. “We have no problem with that,” he said. “If the Russians ask for rubles, we pay in rubles.”

Hungary has long-term gas supply contracts with Russia. The next tranche is to be paid in May. The exact terms of these agreements are not known. As Orbán explained, it is not only the price that matters, but above all the long-term security of supply. Orbán had developed a good relationship with Russian President Vladimir Putin over the past few years.

Last week, he asked western countries to pay for the energy they get from Russia in rubles instead of dollars or euros. The G7 countries, including Germany, had categorically rejected this.

On Sunday, Slovakia’s Economy Minister and Deputy Prime Minister Richard Sulík announced that his country would, if necessary, accept Russian terms of payment for gas imports rather than damaging its own economy. He said on public television: “The gas must not be turned off. That’s why I say, even if that may seem like too pragmatic a position to some: If the condition is to pay in rubles, then we’ll pay in rubles.” Slovak industry cannot completely do without Russian gas, explained Sulík.

Sulík condemned Russia’s demand to pay for gas imports in rubles as a violation of existing contracts. However, he pointed out that Slovakia currently gets 85 percent of its gas from Russia. Work is being done to reduce this dependency, among other things by importing liquid gas. However, it will take years before the technical prerequisites are in place to completely replace Russian gas, explained Sulík, who is also party leader of the liberal second-largest governing party, SaS.

Until 2009, all of Slovakia’s gas imports came from Russia and flowed into the country via Ukraine. The temporary interruption of these imports in 2009 caused by a Russian-Ukrainian trade dispute caused a shock in Slovakia. As a consequence, the then social-democratic government provided an alternative solution that made it possible for part of the required gas to be delivered via the Czech Republic.

Experts expect that the war in Ukraine will make commodities such as gas, oil and wheat permanently more expensive. So far, companies have reacted differently, but mostly pointed to the severe impact in the event of an abrupt halt to imports. A discussion about speed limits to reduce fuel consumption recently flared up, and at the same time private households are calling for waivers from several sides.

The employer president of the metal and electrical industry, Stefan Wolf, told the Augsburger Allgemeine: “Nobody would be served if people sat in their homes at 24 degrees, but the companies in which they work collapsed.” The first public swimming pools lowered the water temperature. In Dutch authorities, the room temperature is regulated down by two degrees Celsius.

More on the subject – What will happen if Russia shuts off the gas supply to Europe?