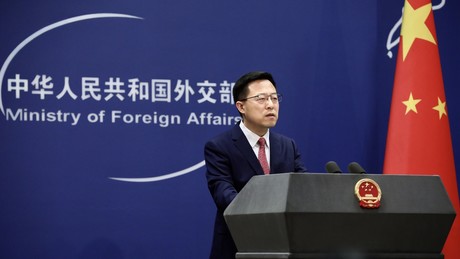 Unlike Western countries, China maintains a more cautious stance on the massacre in the Ukrainian city of Bucha. Beijing is calling for investigations into what happened in Bucha to be based solely on facts.

Zhao Lijian, spokesman for China’s Foreign Ministry, stressed the importance of a thorough investigation into the massacre of civilians in the Ukrainian city of Bucha during a press conference on Wednesday, stressing that any allegations should be based solely on facts:

“China attaches great importance to the humanitarian situation in Ukraine and is very concerned about the civilian casualties.”

The circumstances of the events should be determined, but humanitarian issues should not be politicized, the spokesman said. Everyone involved should keep a cool attitude and avoid unfounded accusations.

Earlier, China’s Permanent Ambassador to the UN, Zhang Jun, also called for the investigation to be based on facts and not to make unfounded allegations. In the Chinese media, the idea was voiced to carry out the investigations under the direction of the UN and only to commission neutral states with the investigation work in relation to the Ukraine war – for example China and India.

More on topic – Nebensja to Zelensky: Ukrainian accusations against the Russian military in Bucha lack evidence