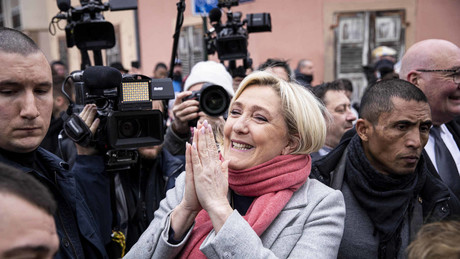 A few days before the first round of the presidential elections in France, Emmanuel Macron’s lead over his pursuers is melting away. Marine Le Pen, in particular, sees chances of winning against the incumbent in a possible run-off election.

In the battle for the office of French President, the air is getting thinner for incumbent Emmanuel Macron, as the Süddeutsche Zeitung reports reported. On Monday, Marine Le Pen’s poll rating climbed to more than 20 percent, while Macron’s poll rating fell to 26 percent.

Just two weeks ago, the polling institutes saw his biggest competitor, Le Pen, remaining stable at 15 to 16 percent. She was well behind incumbent Macron, who had a 15 percentage point lead over Le Pen for three good weeks. The Russian military intervention against nationalist forces in Ukraine, like the corona crisis before it, had given Macron an enormous boost. 30 percent of voters said they wanted to vote for Macron in the first ballot. But since the end of March, the gap between Macron and Le Pen has been steadily shrinking.

Polls for the case of a second round of voting are now causing particular excitement. On April 24, the top two candidates will compete against each other in a runoff. If Macron – as in 2017 – had to run against Le Pen again, the opinion research institutes currently expect the election to be as close as possible. While there is still no poll that sees Le Pen as the winner, the Harris Institute released a poll Monday night that showed Macron would get 51.5 percent of the vote, while Le Pen could get 48.5 percent. But a lot can happen before then.

For many French people, Le Pen stands much more than Macron for a France of the lower middle class, i.e. for those people who are hit particularly hard by the fact that food and petrol have become increasingly expensive due to inflation. The issue of purchasing power therefore dominates their election campaign.

But there could also be a “laughing third party”: Jean-Luc Mélenchon on the left is also rising in the polls and is currently at 17 percent. The well-known French election researcher Nonna Mayer said on Monday that she had “never seen an election with such an uncertain outcome”.