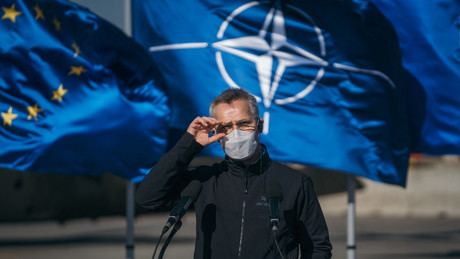 NATO plans to deepen its cooperation with partners in Asia to respond to the growing “security challenge” emanating from China. Especially since Beijing refuses to condemn Russia’s ongoing military operation in Ukraine, Secretary General of the US-led military alliance Jens Stoltenberg said at a press conference on Tuesday.

He announced that the alliance would receive foreign ministers from NATO member states, as well as those from Finland, Sweden, Georgia and the EU for a meeting in Brussels. However, the Norwegian native also pointed out that NATO’s Asia-Pacific partners – such as Australia, New Zealand, Japan and South Korea – had also been invited. Because the current security crisis has “global effects”.

The ministers will therefore discuss new strategic concepts that take into account the military conflict in Ukraine. But they will also, for the first time, include the issue of “China’s growing influence and coercive policies on the global stage, which pose a systematic challenge to our security and our democracies.” Stoltenberg expressed hope that NATO could deepen its cooperation with its Asia-Pacific partners in areas such as “arms control, cybersecurity or hybrid technology”.

Speaking to the press on Tuesday, the Secretary-General said:

“We see that China has not been ready to condemn Russia’s aggression and has joined Moscow in challenging the right of nations to choose their own path.”

The NATO Secretary General warned that the democratic states must stand up for their values ​​against “authoritarian powers”. According to the US government-funded NGO Freedom House, five of NATO’s 30 members are not considered full-fledged democratic states: Turkey, Hungary, Albania, North Macedonia and Montenegro.

Since the start of the Russian military offensive against Ukraine, Beijing has held back on this matter and has always called for a peaceful solution to the conflict. At the same time, China refused to condemn Moscow’s actions or join the sweeping economic sanctions against Russia imposed by countries such as the US, Canada, Britain, Japan, Australia or European Union member states.

In recent weeks, the US had been putting increasing pressure on China to choose sides. US President Joe Biden warned Beijing of possible “consequences” and “costs” should China decide to support Russia in the Ukraine conflict, be it militarily or by circumventing international sanctions.

Moscow attacked its neighbor in late February after Ukraine failed to implement the Minsk agreements signed in 2014 and Russia eventually recognized the Donbass republics of Donetsk and Lugansk. The agreement brokered by Germany and France was intended to regulate the status of these regions within the Ukrainian state.

Russia is now demanding that Ukraine officially declare itself a neutral country that will never join the US-led military alliance. Kyiv, in turn, insists that the Russian offensive was completely unprovoked and constitutes “aggression”. The Ukrainian government has also rejected claims that Kyiv planned to take back the two republics by force.