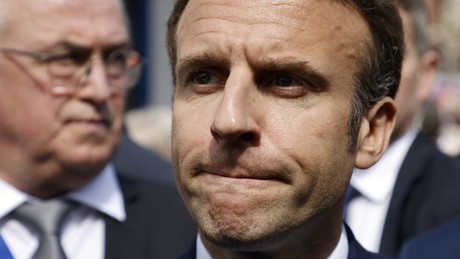 In France, the so-called “McKinsey Affair” is taking on increasingly threatening proportions. According to a report in the weekly newspaper “Marianne”, there could now be an official investigation into suspected money laundering against the company. That could be dangerous for Macron.

According to the French weekly Marianne, the Parquet National Financial (PNF) is considering the possibility of launching an investigation into “money laundering” against the consulting firm McKinsey. The PNF is a French judicial institution created in December 2013 and responsible for prosecuting serious economic and financial crime. An explosive detail shortly before the first round of the presidential elections in France: The company, which is now to be investigated, regularly receives orders from the French state.

As the weekly wrote on April 4, the PNF “is considering the possibility of a preliminary investigation against the consulting firm McKinsey […] because of money laundering”. As Marianne further reports, a few days before the first round of the presidential elections, this is a “highly risky issue”. The newspaper continued, “I’ve seen their orders skyrocket under the current five-year period.”

The PNF’s “deliberations” are said to have started on March 16, according to a report by the French Senate. According to this Senate report, spending on outside consultants has skyrocketed during Macron’s tenure. In addition, the frequently constrained US company McKinsey is said to have paid no taxes in France for at least ten years. The company claims to have followed the French rules.

According to the Senate investigation, government spending on external consultants increased by 45 percent between 2018 (379.1 million euros) and 2021 (893.9 million euros). The use of advisors has become a reflex, also for crucial reform projects during Macron’s tenure. For example, entire areas of dealing with the corona pandemic have been outsourced. The expertise provided by the consultants was of varying quality, it is said. The Senate Commission demanded transparency, clear rules and a systematic evaluation of the external expertise.

According to Marianne, an investigation by the PNF is tantamount to “poking your nose into the relationships between an American consulting firm and the numerous authorities that have been dealing with them for ten years … With the risk of incestuous relationships between the various actors being involved officials and politicians on the one hand, and consultants on the other.”

“If there is evidence of manipulation, it should be prosecuted,” Emmanuel Macron said on March 27 to those who accused him of these numerous contracts. In particular, the President had taken the view that McKinsey’s non-payment of corporate income tax could be explained by the applicable tax rules. Now the affair could boomerang for him in the elections.