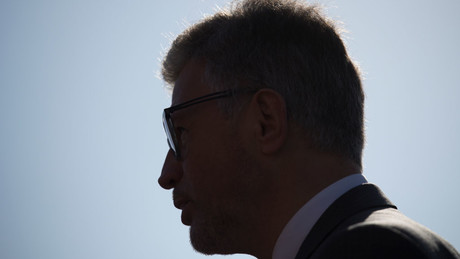 A change.org petition calls for the dismissal of the Ukrainian ambassador to Germany, Andriy Melnyk. The creator of the petition writes that this has “in the meantime overstretched the curve”. We remember some of the drops that filled the cask.

One started on Tuesday Petition on the change.org petition platform calls for the dismissal of the Ukrainian ambassador to the Federal Republic of Germany, Andriy Melnyk.

The initiator of the petition writes in the justification:

“Mr. Melnyk has meanwhile gone too far. What was once a courageous act by a Ukrainian ambassador has now degenerated into hate speech against German politics. His statements are proving to be ungrateful and unfounded towards the German population. Furthermore, his demands would result in that an economic crisis develops in our country or that NATO is actively involved in the war. Both must be prevented! Ambassador Melnyk is no longer acceptable and no longer meets the demands of a diplomat. We therefore demand the immediate dismissal of the ambassador!”

Interest in the petition has so far been muted. In the late afternoon of the first day of the race, only 134 supporters had signed.

A whole series of scandals and undiplomatic interventions in Germany’s domestic politics are associated with West Ukrainian Melnyk, who has been representing his country in Berlin since 2014.

Shortly after taking office as ambassador he celebrated the ceremonial consecration of a monument for the Ukrainian “national hero” Bandera, who is responsible for the murder of thousands of Poles and Jews, and for a Ukrainian nationalist march in Munich. In 2017 he threatened the musician Hans Peter Geerdes (stage name HP Baxxter), the frontman of the band “Scooter”, with criminal prosecution and sanctions for a performance on the Crimean peninsula.

In May 2020 he sharply attacked Brandenburg’s Europe Minister Katrin Lange (SPD)., which on May 8, on the occasion of the 75th anniversary of the end of the war, spoke critically of the sanctions against Russia. Also in 2020 he left a German-Ukrainian commission of historians because of their negative position on recognizing the famine of the winter of 1932/33 as a genocide.

In 2021, Melnyk was in top form: first he took part in spring aimed at the Federal President Franz-Walter Steinmeier, because it reminded of Germany’s historical responsibility towards Russia. In April he threatened to use Ukrainian nuclear weapons and in May he shot himself at the party Die Linkewhich outraged him with a peace policy motion in the Bundestag.

Shortly thereafter he called for the renaming of the German-Russian Museum in Berlin-Karlshorst and boycotted a memorial event on the 80th anniversary of the German invasion of the Soviet Union, which Steinmeier attended as Federal President. In October he demanded German reparations as an ultimatum for his country and at the turn of the year the delivery of weapons and war equipment.

Since the beginning of the Russian military intervention in Ukraine, Melnyk has been a regular guest on talk shows and newspaper columns. One could almost think that he sets the guidelines for German politics. If Melnyk demands weapons, weapons will be delivered. If Melnyk demands sanctions against Russia, sanctions will be introduced. However, he was not satisfied or grateful even when German politicians demonstrated obedience. It’s never enough, and Melnyk always claims that Germany owes Ukraine more and more for one reason or another.

Even before the war began on February 24, the diplomat threatened: Kyiv will never forgive German betrayal. When the Prime Minister of the structurally weak Mecklenburg-Western Pomerania expressed her solidarity with Ukraine after the start of the war and after the abandonment of the NordStream 2 project, which is important for her country, Melnyk insulted her on Twitter as a hypocrite.

wrote the West Ukrainian on February 26 in a familiar tone.

In mid-March, Melnyk defended the far-right Azov regiment. At least this time he said “please”:

“Please stop demonizing the Azov regiment and playing into their hands with propaganda – now even in the midst of the RUS extermination war. These brave fighters are defending their homeland, especially the besieged city of Mariupol. Leave them alone.”

Only now is there a certain displeasure in German politics.

What Schäfer particularly annoys: The fact that the ambassador portrays the Social Democrats as “Putin’s buddies” is “outrageous.” It is also unacceptable for him to simply defame longstanding and experienced foreign politicians like Michael Roth as “assholes”. It’s just “indecent”.

So did the SPD member of the Bundestag and Parliamentary State Secretary Sören Bartol stated on March 15, according to Die Welt, his displeasure with the Ukrainian ambassador in Berlin. He wrote, according to the newspaper, on Twitter:

“I now find this ‘ambassador’ unbearable.”

At the end of March, Melnyk finally attacked the chocolate manufacturer Ritter Sport in a tasteless way by tweeting, based on its well-known advertising slogan:

“Square. Practical. Blood. Despite the [russischen] Aggression against Ukraine remains at Ritter Sport in Russia. Best of luck.”

Whether the ambassador is doing his country a disservice with his bluster is another matter.