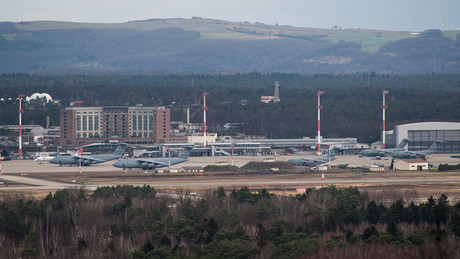 US military locations such as Ramstein, Spangdahlem, Baumholder, Kaiserslautern or the air base in Büchel have made Rhineland-Palatinate the “hub” for US military operations in Europe, Africa and the Middle East for many decades. Now the NATO eastern flank is to be supplied from there.

According to the plans of the USA and the state government of Rhineland-Palatinate, the NATO eastern flank, which has gained in importance for the military alliance since the start of the Ukraine war, is to be supplied with supplies mainly via the umpteen US military bases in Rhineland-Palatinate. According to Interior Minister Roger Lewentz (SPD), the otherwise rather tranquil federal state in the southwest will “experience an incredible increase in importance” as a hub for NATO’s eastern flank.

This is his impression after talks with the US Department of Defense, the US State Department and with the congressmen responsible for the US military budget in Washington, Lewentz told the dpa after his Returning from the USA in Mainz.

Investments in the US military base in Baumholder and the new US military hospital currently under construction in Weilerbach are planned in the US government budget for the 2023 financial year. Initially, 506 million US dollars are planned for this purpose. According to plans by the US government, additional investments of more than one billion US dollars are to flow into the south-western federal state in the coming years.

For Baumholder alone, around $207 million is planned in the US government’s 2023 budget plan to build homes for families and schools, as well as a new headquarters for an additional deployment, Lewentz said. The Minister of the Interior has not yet made any statements about the new unit.

However, there is the one released by the White House in Washington, DC in March budget for the year 2023, even without an explanation from Lewentz, answer as to which units should also be stationed in Baumholder. According to the documents, the foundation stone is to be laid in Baumholder, Rhineland-Palatinate, to transform the sleepy German town into a center for US special forces in Europe.

According to the documents, the planned investment in Baumholder serves solely to expand a center for US special forces in Europe. The creation of the new living space for families of US military personnel, announced by Lewentz, is only to be supplemented by the additional Deployment of US special forces meet the housing needs.

During the Cold War, the city on the rural western edge of Rhineland-Palatinate had the largest concentration of American combat troops in Europe. Today, however, it mainly serves as a location for logistics units.

The US Department of Defense budget provides $78 million to build a Special Operations Battalion and three other outbuildings for communications, operations and support duties at Smith Barracks in Baumholder.

Beyond that, there are few details. However, there have been plans for years to relocate hundreds of the special forces stationed in Stuttgart to Baumholder.

Former commander of the United States Special Operations Command, General Tony Thomas, confirmed the plan in 2018 when he announced the idea of ​​deploying Green Berets and Navy SEALs to Baumholder. According to Thomas, the extensive areas and the military training area in Baumholder offer ideal conditions for training for the special units.

The Green Berets are reconnaissance specialists. The scouts, who usually operate in small groups, are supposed to operate undetected deep in the enemy’s rear. The men and women of the unit speak at least one foreign language and are specially trained in counter-terrorism. During the last Gulf War they located Iraqi targets for Allied attacks. The Navy SEALs are the US Navy’s special forces. Forerunners of the Seals were the “Frogmen” who prepared the Allied landings in Normandy during World War II.

According to Lewentz, a further 299 million euros are planned for the new hospital in Weilerbach. “This is the largest military project outside of the United States.” The contract with the general contractor has already been signed and construction is expected to begin in the third quarter of this year, explained the Rhineland-Palatinate Minister of the Interior:

“Of course, the entire construction volume is significantly higher. But that makes it clear that the start will be made this year.”

“In the last few months and years, we have been able to prove that the Ramstein hub, but of course also with the large supply possibilities from Kaiserslautern, is flexible and capable of being relocated quickly,” emphasized Lewentz, noting that this is seen in the USA.

Representatives of the US government have the highest regard for Chancellor Olaf Scholz’s (SPD) decision to “pack the 100 billion euro package for the Bundeswehr,” Lewentz continued in Mainz:

“And that puts us in a completely different culture of discussion than in the last few years of the Trump administration. In America, people rely very heavily on a strong Germany.”

More on the subject – Air Base Ramstein: US air force intelligence trained with France for emergencies