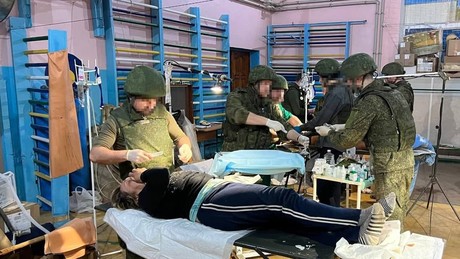 The Russian army is increasing its presence in the Kharkov area in eastern Ukraine and the first war reporters are also following the troops. In their first reports, they present a Russian field hospital where residents of the city of Izyum are treated.

There have been few correspondent reports from the Kharkov region since the start of the Ukraine war. Several war correspondents are now on their way to the greater Kharkov area and have already reached the border area between the Kharkov Oblast and the Donbass republics. In the next few weeks, a major offensive is to be launched from the north on positions of the Ukrainian army.

There is already fierce fighting south of the strategically important city of Izyum in southern Kharkov Oblast. Izyum, which is currently under Russian control, is currently being bombarded with cluster munitions by the Ukrainian army. According to Komsomolskaya Pravda newspaper reporter Alexander Koz, wounded civilians from Izyum are being treated in a Russian field hospital.

“Izyum greets us with artillery roars. The city, which was once the headquarters of Ukraine’s anti-terrorist operation, is now completely under the control of Russian forces. When Ukrainian forces leave a place of residence, they traditionally shell it with all calibers. Somewhere within a kilometer radius, several dozen explosions can be heard at once – triggering the cluster munitions launched by enemy artillery via the Smerch multiple rocket launcher system.” writes Koz in a report.

Then the Russian ambulances rush to the shelled areas and take the wounded to a mobile field hospital, which, judging by the pictures provided, is set up in a gym. A woman says her husband died in the shelling. She and her son narrowly escaped death. She is in shock and speaks very quietly. Patients lie on light, portable treatment beds, and Russian military medics bend over them, who have to wear their heavy protective gear, including helmets, even during the operations – the projectiles could also hit the hospital building at any time.

The correspondent describes injuries – hardly anything serious at this moment. “The surgeries are performed under local anesthesia. A man has shrapnel removed from his abdomen: ‘Be patient honey, it’s getting better, be patient.’ A woman’s hand is cleaned of metal.” But over time, the number of seriously wounded people who, after being treated in the hospital, are brought to Belgorod in Russia by military helicopters also increases. This is a dangerous undertaking, Koz emphasizes, because the helicopters are fired at by the Stinger man-portable anti-aircraft missiles, which Ukraine is also getting from Germany.

In another video, he shows how low the helicopters have to fly – barely ten meters from the ground. “They literally have to jump over power lines.”

The correspondent emphasizes that Russian doctors do not distinguish between “our” and “foreign” soldiers, but treat everyone. They could also be Ukrainian soldiers if they are captured. Finally he comes to the massacre allegations to speak of Bucha against the Russian army.

“It’s a pity that those who accuse the Russian fighters of massacres of the civilian population don’t see all of this here. Bucha near Kyiv was shelled by Ukrainian artillery, just as it’s doing it now in Izyum. And the dead on the Roads weigh on the conscience of those who gave the order to fire howitzers and missile systems at residential areas.”