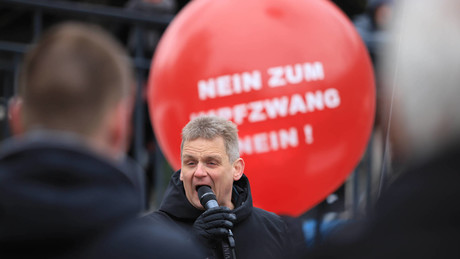 Rows of people who are “fully immunized” with Corona are lying flat, in the COVID intensive care units the proportion of those who have been boosted is now almost twice as high as that of the unvaccinated, and even the public media have discovered the topic of vaccine damage after more than a year. That doesn’t dissuade the hardliners in the Bundestag from their belief: Some vaccination should be decided, and if not for all adults, then at least from 50, from 60 or just as a precaution for the fall. The arguments about this are increasingly based on myths rather than evidence.

Compulsory vaccination bingo: who wants what?

Shortly before the vote on April 7th, the mandatory supporters get really hot again. The motion of the group “General Vaccination from 18” found around 230 supporters, especially among the Greens and in the SPD, but is not able to win a majority. This group has now come to an agreement with another traffic light group that wants to oblige everyone over 50 to have an injection and the younger ones to seek advice. The compromise: The lower age limit for the procedure should be raised to 50 years.

The union refused. So both groups finally acted to raise the age limit to 60 – also unsuccessfully. Because the CDU and CSU want a “Vaccination Prevention Act”: With a register (still to be created), the mandatory measure should be able to be “sharpened” in stages, depending on the pandemic numbers. That the number of positive tests will increase again in autumn is as certain as the Amen in church.

In addition to the two pro-vaccination draft laws, some with a duty to advise, and the CDU “precautionary” request, there are also two applications against a duty. A cross-party group led by Wolfgang Kubicki (FDP) wants to avoid compulsion, but “increase willingness to vaccinate” through advice, for example. The AfD application is directed against any attempt at a state-prescribed vaccine treatment.

The myth of foreign protection

The debates and justifications of the advocates of compulsory vaccination are increasingly lacking in evidence. They still suggest protection from others, for example. The aim is to protect all “vulnerable groups” from infection by transmission by vaccinating all. The (incomplete) figures from the Robert Koch Institute (RKI) alone have been debunking this argument as a myth for months.

In his last week’s report the RKI (p. 29) recorded some of the “symptomatic COVID-19 cases” for various age groups including vaccination status for the period from the end of February to the end of March. Of those over 60 years of age, only around 19 percent were not vaccinated or only partially vaccinated. Nationwide, their share in this group was a good eleven percent at the end of February. And: Almost 70 percent of the over 60-year-old patients were even boosted, i.e. had received at least three injections, in the total population this was around 77 percent.

The situation is similar for younger adults. The RKI recorded around 20 percent of the 18 to 59-year-olds who were not vaccinated or incompletely vaccinated, in the total population this was 17 percent. More than 57 percent of boosted younger adults were also infected; the total booster rate nationwide at the end of February was 59 percent.

The deviations between the vaccination rates in the sick and the general population were therefore only marginal for the entire month of March. In addition, the RKI recorded just under six percent of the total number of corona cases identified during this period, namely around 379,000 of almost 6.5 million reported cases. It is questionable how representative this tiny section can actually be. In any case, it should be scientifically undisputed that corona patients with symptoms, regardless of their severity and their vaccination status, can infect other people.

According to the Federal Institute, which politicians constantly refer to, a significant external protection through a corona vaccination is therefore excluded. Now self-protection comes into play. As is well known, one argument of the mandatory proponents is that the vaccination prevents severe courses, thus reducing the occupancy of intensive care beds and protecting the healthcare system from overload. But what is it really about?

A look at the last Daily report of the DIVI intensive care register shows the following: On April 5, there were a total of 2,160 patients in the COVID intensive care units, of whom 830 were on ventilation. At no point in the entire omicron wave were there more than 2,500 patients with a positive test. Overall, the DIVI reported a rather below-average occupancy of the intensive care units with 18,701 adult and 1,929 underage patients.

In addition, no distinction is made as to whether the patients are actually being treated for COVID-19 or whether they only tested positive by chance. In recent weeks, reports from clinics have increased, according to which up to 90 percent of patients Corona only an incidental finding was and they were in the clinic because of other illnesses, including in Hesse.

Now the question arises: how many corona patients were unvaccinated? This is from the RKI report out. On page 20, the institute lists the DIVI numbers on the vaccination status of a good three-quarters of all intensive care patients who tested positive (5,455) for the period February 28th to March 27th.

Result: Only a quarter (25.2 percent) was not vaccinated, 8.2 percent had incomplete vaccination protection and 66.6 percent, i.e. two thirds, were “fully immunized” according to DIVI. The number of boosted corona intensive care patients in March was almost 44 percent, almost twice as high as that of unvaccinated patients.

Since these numbers deviate somewhat more clearly from the vaccination protection in the general population, there is probably a certain degree of self-protection. However, a lot is not taken into account: the low total number of corona patients despite such high incidences, the non-distinction between those treated because of or only with corona and the therefore unknown number of actual severe COVID-19 cases. One thing is definitely proven: Vaccination definitely does not offer total protection against a serious illness. And how long it protects at all cannot even be quantified by the RKI.

Myth of a vaccination without side effects

On the other hand, treatment with COVID-19 vaccines does pose a risk of serious vaccination complications – despite all the statements to the contrary by politicians and the media. Health Minister Karl Lauterbach (SPD) even described the vaccination last year as “free of side effects”.

The fact that this is not the case has even reached public broadcasting after more than a year. end of March reported the ARD magazine Plusminus about some very young vaccination victims who would probably hardly have fallen ill with the corona virus. They unanimously complained that doctors didn’t take them seriously, sometimes didn’t even report their complications and that they even had to pay for many diagnoses and treatments themselves. Below the report are 69 pages of comments where readers complain about similar problems.

The Charité epidemiologist Harald Matthes also reported that he had monitored vaccinated people with other experts and had come to the conclusion that around 70 percent of the serious vaccination damage was not recorded by the Paul Ehrlich Institute (PEI). About that reported also the focus.

However, the PEI is already months behind in recording reported suspected cases. His latest security report published it in February. This contains reports up to the end of 2021. The date for the next publication up to and including the end of March has not yet been set, it provides information on its website.

In the report, the PEI, hidden in the running text, states a total of almost 245,000 reported suspected cases, of which it classified around 30,000 as serious. Among them were 2,255 deaths, 85 of which the PEI classified as “possibly or probably” caused by the vaccination. However, this number is not based on clinical studies, but on a statistical estimate.

If you take the Charité study as a basis, according to which around 70 percent of the serious vaccine damage was probably not recorded, up to 100,000 cases should be assumed by the end of the year. With almost 62 million people vaccinated once, twice or three times in Germany at the end of December, there could be a serious side effect for every 620 vaccinated people. This is far more common than just “very rarely”.

“Exorcising the devil” with the “Belzebub”

Conclusion: Official sources, on which politics is supposedly based, contradict almost all claims of the vaccination advocates completely or at least partially. Significant third-party protection can be ruled out. If there is any protection against severe courses, then only to a limited extent and under largely unknown circumstances. And quite obviously there is a large number of unreported serious side effects.

In addition, the vaccines have not yet received full approval. Apparently, important safety studies by the pharmaceutical companies are still missing. So far, one has searched in vain for comprehensive, independent and representative studies in Germany. So with every vaccination there is a risk of serious damage, even death, that cannot be specifically quantified.

It is not even known whether the risk of vaccine damage exceeds that for severe COVID-19 courses given the milder omicron variant. At least in younger age groups this is even very likely. According to the RKI weekly report, around 0.4 percent of the over-60s with symptoms were treated in an intensive care unit in March, one in 250. Among 18- to 59-year-olds it was one in 10,000 patients. The risk of serious vaccination damage could be up to 16 times higher than intensive care for COVID-19.

Nevertheless, the “vaccination obligation” group wants to drive out the “devil corona” with the “Belzebub vaccination”. According to the RKI, just eleven percent of those over 60 are still unvaccinated, and 14 percent of those over 18. In any case, it is clear that Corona could not be completely driven out even if everyone were vaccinated. Countries with vaccination rates of over 90 percent, such as Portugal, have clearly demonstrated this this winter with incidences of almost 4,000. Such a compulsory vaccination would hardly be compatible with the German Basic Law.

More on the subject – Karl Lauterbach – Narcissist with Fool’s Freedom?