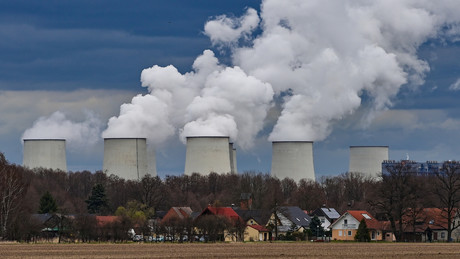 The federal government and the EU are behaving as if there were a competition going on for the greatest nonsense that could be done, which they absolutely wanted to win. The latest coup: now also doing without coal imported from Russia.

Currently, half of the coal burned in Germany comes from Russia. That’s 14.5 million tons a year, half of which is used to generate electricity and the other half for steel production. According to a report by the Ministry of Economy, the Business Insiderquoted, this proportion is to drop to 25 percent in the next few weeks “through contract changes”. But even a quarter is far from zero.

Which is why the said report also assumes that after the four to six weeks at the latest, for which the existing stocks should be sufficient, the consequences would be felt: “After the stocks have been used up, individual power plants would probably have to be shut down,” it says.

From the few quotes that were published from this report, however, it is not clear whether they also included the possibility that not only coal deliveries would be lost, but possibly those of natural gas as well. After all, it is far from clear whether the federal government can bring itself to pay for deliveries in rubles.

The detachment of the German branch of Gazprom from the parent company and its virtual expropriation by Federal Minister of Economics Habeck could result in a situation that can exacerbate this problem – the supply contracts exist with this very subsidiary, which is then under the control of the Federal Network Agency, but unfortunately, unfortunately has no power of disposal over Russian gas deposits. However, there are no contracts with the parent company itself; they would then have to be re-signed at new prices. Definitely another point in the GAU competition.

Since most nuclear power plants were shut down, the security of supply in the German power grid has been based on two pillars, coal and gas power plants, which must ensure that the lights do not go out at night or when there is no wind due to the unavoidable fluctuations in the beloved renewable energy. The self-made risks in the gas supply, which are ultimately only based on the fact that one was not willing to put a stop to the slaughter in Donbass and then thought that Russia had to be punished if it did so, are now being compounded by additional risks in the Coal supply supplemented.

Unfortunately, coal is also a sought-after commodity, and the main buyer and producer is China of all places. Hardly any coal is mined in the EU, not at all in Germany; and the biggest Coal conveyors to China are also not around the corner – they are Indonesia, India, Australia and the USA. Yet an attempt to find a substitute for Russian coal could run into geopolitical difficulties for some of the candidates on this list.

Apart from the fact that China and India are largely self-consumers of their own coal, they might be reluctant to help the Germans out of a bind they have gotten themselves into with their anti-Russian policies. Even with Indonesia one would have to ask oneself that. Australia might be happy because China stopped importing their coal since they jumped on the anti-Chinese bandwagon with a vengeance; that could also solve the problem that half of the German coal consumption goes into steel production and that certain coal qualities are needed that are not available everywhere. But there is no supplier in the whole world that is further away, which should have an impact on the price.

Of course you can also buy coal in the USA instead of in Russia. It should actually be clear to anyone who sounds so big that dependence on Russian energy supplies is a security risk that dependence on the United States will then drive out the devil with Belzebub. For while Russia, and before it the Soviet Union, have a history of reliable supplies even during troubled periods, the US is known for its propensity for blackmail of all kinds. At best, replacing Russian gas supplies with American ones is intelligent to a limited extent; to put a dependency on coal after that defies description.

Meanwhile, the Ukrainian government is vociferously demanding that Western Europeans cut off gas supplies from Russia altogether. Of course, she by no means declares that she wants to do the same herself. Then she would run out of gas. But we Western Europeans should be happy to freeze to save the skin of the Ukrainian kleptocracy. Which is a bit contradicting. After all, there have been years of intrigues, from Kyiv as well as Warsaw, to bring down Nord Stream 2, and Kyiv still collects about a billion a year for the transmission, so they should both be satisfied after Scholz and co have sacrificed Russophobic madness. Apparently they should for now even let a lot of gas through the line.

Although, German politics is anything but innocent in the Ukrainian madness; immediately after the collapse of the Soviet Union, the return to the Ukraine of Nazi collaborators kept in Bavaria and their descendants was eagerly encouraged; Yulia Tymoshenko with her BDM hairstyle, who made her wealth by simply robbing the pipeline, was highly popular, and the 2014 coup government was supported by Steinmeier as foreign minister, like every Ukrainian government since. The fact that their representatives, including Mr. Melnyk, now behave as if they own the world and not the poorest country in Europe is of course somewhat inappropriate for an inner-European colony; but this serpent was fed on one’s own breast.

By the way, this reptile has two mothers at once. Or, one could put it another way, a keen passion for biting any hand that feeds it. After all, Ukraine was nursed back by Russia for decades by taking on a share of the Soviet debt and by supplying particularly cheap gas. For which Ukraine thanked with the Donbass war.

The very existence of Nord Stream 1 is a product of this Ukrainian madness, although there are more tangible reasons to be assumed. When the Ukrainian pipeline was to be rehabilitated in the 1990s, the Ukrainian government refused on the grounds that a Russian company was part of the consortium that wanted to finance the rehabilitation. In reality, the reason may have been that foreign operators, Russian or not, then want to take control of this pipeline as well, which should make it much more difficult to simply steal gas.

If the Ukrainian robber barons had been stopped in time, regardless of which side, we probably wouldn’t be in the mess we are in today, even with the most massive US efforts. But Ukraine is a colony and ruled by compradors, and under such conditions it always flushes up the most corrupt and the most unscrupulous. To whom the well-being of their own country is the same as that of any other country, only the state of their own account is not, which is why they can be used as a weapon in two directions without any problems.

Because in fact, as you can see from the Energy Games, the USA is waging a war against two sides in Europe, against Russia and against Western Europe at the same time. It’s just that the Western Europeans, and especially we Germans, haven’t grasped this yet and are instead continuing to compete for the greatest nonsense that can be done.

More on the subject – The coming collapse: The German mistress at the burial of the US prince