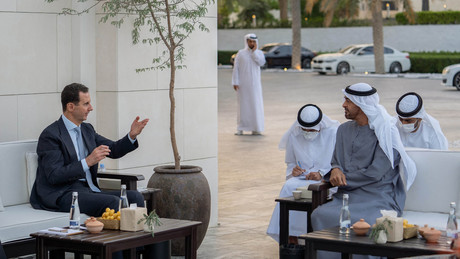 After Bashar al-Assad’s recent visit to Abu Dhabi, Turkey is now also considering normalizing its relations with Syria. In Ankara, there is obviously hope that the normalization of relations between the two countries could also make it easier for Syrian refugees to return to their home country.

Syrian President Bashar al-Assad recently visited Abu Dhabi and met with UAE leaders. This coincidence made it clear how far the Gulf States have now distanced themselves from the West and are thus preparing for a Middle East without a strong US presence. Now Turkey is also examining the possibility of resuming talks with the Syrian government and normalizing its relations with Syria. This was reported by Press TV, citing the Turkish newspaper Hürriyet on Wednesday.

The Turkish newspaper reports that the already existing relations between Damascus and Ankara – despite the ongoing Ukraine war – could be improved. Three main issues are on the agenda for Ankara: maintaining the unified structure and territorial integrity of Syria, ensuring the safety of Syrian refugees who may return to their country, and the activities of the PKK in Syria.

Regarding Assad’s recent visit to Abu Dhabi, Hurriyet writes that Ankara believes that Syrian President Bashar al-Assad’s visit to the United Arab Emirates (UAE) last month showed that he wants to take new initiatives and needs more support to further stabilize his country. Ankara could use this process in its favor if this “new phase” of relations with the United Arab Emirates was considered. A possible success of these efforts could lead to the return of at least half of the Syrian refugees living in Turkey to their homeland, Hürriyet commented.

The Turkish President also traveled to the United Arab Emirates for the first time in almost ten years in mid-February. The two countries signed a joint statement to start negotiations on a bilateral trade and investment agreement known as the Comprehensive Economic Partnership Agreement (CEPA).

The Syrian government in Damascus has repeatedly called on key foreign actors in Syria, such as the US and Turkey, to stop supporting separatist movements and jihadist militias in northern Syria and to stop violating Syrian sovereignty.

In recent years, Turkey has successively invaded Syria and Iraq and occupies areas in the north of both countries, allegedly to fight “Kurdish terrorists” there, i.e. to fight those militias that were themselves first armed by the USA in order to turn the to fight “Islamic State” (IS).

Syria is currently struggling to return to normal after much of the country was devastated over the past decade and has now been liberated by terrorist organizations and their allies. The last stronghold of the jihadists is in the province of Idlib in the northwest of the country, where Turkish troops are also present. Much of the territory in northeastern Syria is also under the control of the Kurdish-dominated SDF, which continues to be supported by the US military.

More on the subject – USA very concerned: UAE Foreign Minister traveled to Damascus for the first time since the Syrian conflict