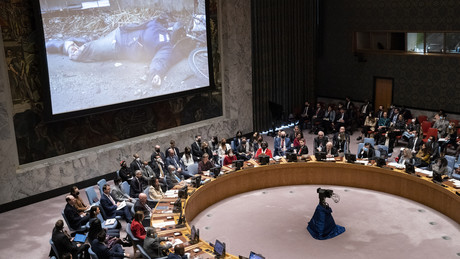 Russia’s military spokesman has accused Ukraine’s security services of staging more killings of civilians in several towns in order to use Western media to blame Moscow for war atrocities, and the foreign ministry has accused the West of delaying investigations into Bucha.

Moscow accuses Kyiv of using the same tactics as in the city of Bucha last week – once again the Russian armed forces are to be held responsible for alleged atrocities. Russian Defense Ministry spokesman Major General Igor Konashenkov stated during a press briefing:

According to “confirmed information”, the shooting took place on Monday in the village of Moschun, about 23 kilometers north-west of the Ukrainian capital Kyiv.

Similar false flag operations were carried out by the Ukrainian side in the cities of Sumy, Konotop and elsewhere, Konashenkov added.

Procrastination of investigations into Bucha

The Russian Foreign Ministry also commented on the Western allegations of the mass killing of civilians in the Ukrainian Bucha and firmly rejected the allegations. Its head, Sergei Lavrov, recalled that Russia had twice tried to bring the incident before the UN Security Council, but Britain, which currently chairs the UN Security Council, refused. The Russian ambassador to the United Nations, Vasily Nebensja, described Britain’s actions as “incredible and unprecedented”.

“It was unprecedented, incomprehensible and unthinkable. We were denied a Security Council meeting, which we requested from the UK Presidency today. During my tenure, I’ve had emergency Security Council meetings on many issues, on weekends, on US public holidays and so on took place – and we have never raised any objections. What has happened here is something incredible and unprecedented in the history of the United Nations. That is a fact.”

Lavrov pointed out that in the last few weeks alone there have been “many examples of open fakes” about Ukraine and that people are already used to this type of fake news from the Syrian war from the Western-backed White Helmets operating there.

The campaigns followed a similar pattern, namely that “immediate propaganda campaigns” were started and the alleged “culprits” were prematurely identified. Such things, especially on the part of US politicians, Lavrov said,

“Most importantly says that many US politicians, who started the war in Iraq under a known pretext, who destroyed Libya together with NATO partners who invaded Syria, have an uneasy conscience. “

“When the truth came out a few days later, nobody in the West wanted to talk about this topic. We will expose such fakes.”

In this context, he also pointed out that the Russian armed forces left Bucha on March 30 – which was also confirmed by the mayor of the small town. Two days later, allegations against Russian troops were made.

On Saturday, the Kyiv official released images and video footage of several bodies lying on the streets of the small town of Bucha, northwest of Kyiv, claiming they had been executed by Russian troops.

Moscow, which insists its military not target civilians when deployed in Ukraine, has firmly denied these allegations as a provocation and false flag operation by Kyiv.

Numerous inconsistencies in the Ukrainian narrative were pointed out, including the fact that the video surfaced only a few days after Russian forces withdrew from Bucha and that the local mayor, in his video speech describing the “liberation” of the city announced, not mentioning any killings of anyone by the Russian troops.

Despite Russian arguments and Moscow’s attempt to convene a UN Security Council session, Western governments immediately ruled for themselves who was responsible for the alleged atrocities. US President Joe Biden has called for a “war crimes trial” for his Russian counterpart Vladimir Putin and the EU has vowed to send its experts to Ukraine to help Ukrainian authorities collect evidence on the ground.

Moscow began a large-scale military operation in Ukraine at the end of February after its neighbor consistently refused to implement the Minsk agreements signed in 2014 and Russia finally recognized the Donetsk and Lugansk People’s Republics in the Donbass. With the protocols mediated by Germany and France, the status of these regions within the Ukrainian state should be regulated peacefully and acceptable to everyone.