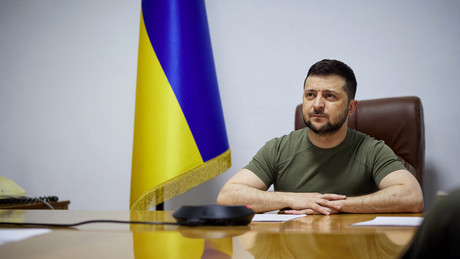 Ukraine’s President said on Tuesday his country would not be like Switzerland but would be a “great Israel”. The Israeli newspaper Haaretz wondered why the Palestinians are on Russia’s side in the Ukraine war.

Ukraine plans to look to Israel and not Switzerland on national security issues after the end of the war, Ukrainian President Vladimir said Zelensky on Tuesday.

Zelensky rejected the concept of neutrality for Ukraine, stating:

“All our people will be our great army. We cannot talk about the Switzerland of the future.”

“But we will definitely be a big Israel with a face of its own,” he added.

“We will not be surprised that in every institution, supermarket, cinema, we will have representatives of the armed forces or the National Guard, there will be people with guns. I am sure that our security issue will be number one in the next ten years. “

Israelis and Palestinians have different attitudes towards the Russian invasion of Ukraine. After a new Peace index-A poll from early March nearly half of Palestinians support Russia, while a robust majority of Israelis reject Russia’s arguments for the military operation in Ukraine. The poll, conducted by Tel Aviv University’s Nimrod Rosler and Alon Yakter, asked whether Russia had the right to use force to advance its interests and protect the Russian people outside its sovereign borders.

The Israeli newspaper hairnet writes in reference to this survey that it would be “logical” if the Palestinians living under occupation identified themselves with Ukraine as a victim and not with Russia. A new poll by Khalil Shikaki and Walid Ladadweh of the Palestinian Center for Policy and Survey Research (PSR) clearly shows that the majority of Palestinians complain about the West’s double standards towards Ukraine and Palestine. The Palestinians are critical of the US and EU’s rapid imposition of economic, financial and sports-related sanctions on Russia for invading Ukraine. Israel, on the other hand, is treated differently by the West and no sanctions are being imposed on the country because of its occupation policy.

Zelensky famously tried to touch hearts in his speech to an Israeli audience: he quoted Golda Meir, referred to the Holocaust and used Israel’s own experiences of “threat, terrorism and victimhood” to instill solidarity in the audience. According to Haaretz, these issues ultimately, albeit implicitly, accused the Palestinians and thereby alienated them. Because with such a speech Zelensky strengthened Israel’s narrative.

More on the subject – Ukraine war: why is Israel offering mediation?