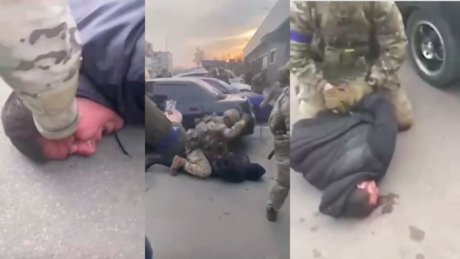 Video footage of uniformed men posing as members of the SBU, kicking detainees in the head and making fun of a man’s weak bladder has been circulating online. Apparently, the incident happened in the city of Dnepropetrovsk.

Footage showing uniformed men beating and harassing civilians was released on Ukrainian social media on Tuesday. The mayor of Dnepropetrovsk, the country’s fourth largest city where the incidents are said to have taken place, justified the abuse on social media. He described those arrested as “gang bosses” and claimed they had previously attacked members of the region’s Landwehr. Furthermore, there are reports from social media users that the abused are said to have expressed pro-Russian views.

The recordings stop two separate videos showing how armed men in camouflage clothing and military equipment brutally arrest and abuse plainclothes men. Those in uniform wear blue armbands, which many Ukrainian soldiers use to indicate their side affiliation.

In one clip, the soldiers can be seen beating a man who is standing with his legs apart and bending down with what appears to be blood on the floor. The perpetrators then turn to another man, whose face is covered in blood and who appears unable to control the pressure in his bladder, which the attackers mock.

The soldiers question those arrested whether they respect the military and whether they are criminals. You can hear the man standing, obviously frightened, shouting “Glory to Ukraine” and denying any wrongdoing.

The second video shows several uniformed men brutally beating at least four men lying on the ground while handcuffing them. The soldiers can be seen kicking some prisoners in the head. Two people also kick the tormentors’ heads from above, while a soldier presses the head of a third person against the asphalt with his boot. One of the soldiers can be heard explaining his affiliation with the SBU. In fact, those in uniform have to belong to a special unit because the use of silencers on assault rifles is not widespread in the army worldwide. However, it is precisely this combination that can be seen in the video footage. One of those arrested is wearing a blue jacket similar to that of one of the men in the first video.

Boris Filatov, the mayor of Dnieper, confirmed on social media that the footage showing the arrest is original. He also explained that the uniformed men were the SBU’s, Ukraine’s secret service, deployed in the event of arrests in Pavlograd. “The thugs literally pissed their pants when the guys hit them hard,” Filatow noted.

The arrest is a warning to “all looters, criminals and degenerates” and their punishment is inevitable. Those who denounced the brutality should join the ranks of the military rather than accusing “honest troops” of a criminal act.

Filatow is known for his exaggerated rhetoric. On Sunday, he said Ukrainians had “full morale to fight, to fight calmly and without thinking [Russen] to kill in maximum numbers anywhere in the world indefinitely”.

The call for violence came in response to Kyiv’s claims that Russian troops had been committing war crimes in Ukraine. Moscow has repeatedly denied the allegations.