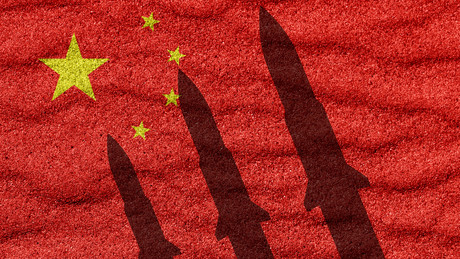 According to media reports, a US admiral announced that China was about to make a breakthrough in the field of nuclear weapons. He is said to have referred to alleged tests of hypersonic missiles and the existence of so-called “nuclear missile fields”.

China is on the verge of a breakthrough in its nuclear weapons capabilities that will result in a significant shift in the global security balance. That’s what US Admiral Charles Richard, head of US Strategic Command, said in a statement he was preparing for a hearing on Capitol Hill, according to Bloomberg.

On Tuesday, the official spoke in a closed hearing before the House Defense Appropriations Subcommittee. The “breathtaking expansion” of China’s strategic nuclear arsenal poses a rapidly escalating threat to Washington, Richard said.

The admiral refers in particular to an alleged test of a hypersonic glider that Beijing is said to have carried out in July 2021 with an intercontinental ballistic missile. In this test, the hypersonic vehicle flew around 40,000 kilometers for more than 100 minutes, according to the report. This was “the greatest distance and the longest flight time of a land attack weapon system of a nation”.

This technological advancement by China would have “serious implications for strategic stability,” Richard warned, adding that US military capabilities and strategies rest on the “assumption that strategic deterrence, particularly nuclear deterrence, will endure.”

If strategic or nuclear deterrence fails, neither integrated deterrence nor other US Department of Defense assets will function as planned, Richard said. The US Strategic Command believes there could be two potential adversaries with large and modernized nuclear arsenals: China and Russia.

These two nations are now capable of “unilaterally escalating a conflict to any level of violence, in any area, anywhere in the world, at any time,” the admiral said in his statement.

Richard has been warning of the allegedly rapidly shifting strategic balance for some time. Already during a visit to Europe in October 2021, he stated that the combined nuclear capabilities of China and Russia would send the US into “unknown waters”. At the time, he also warned that Beijing was now in a good position to implement “any possible nuclear deployment strategy.”

US media have been reporting since at least mid-2021 that Beijing is said to be building more than 100 missile silos in a desert in western China. Now Richard spoke of “nuclear missile fields,” each with about 120 silos, that would give Beijing a “robust” ability to reach the US mainland.

The US admiral also accused Moscow and Beijing of developing “coercive strategies” that the US should prepare to counter. In particular, he claimed that as part of its purported “escalate to de-escalate” strategy, Russia could launch a small tactical nuclear strike against a non-nuclear NATO member to induce the military bloc to back down in a potential conflict.

The US officer also stated that Moscow had resumed its Tu-160 strategic nuclear-capable bomber program, which he described as “an achievement not seen since the Cold War”.

After the United States had described China as its “most consistent strategic competitor,” Beijing accused the US government last week of trying to “contain and suppress” China and Russia. Chinese Foreign Ministry spokesman Wang Wenbin once advised Washington against “creating imaginary enemies, ignoring other countries’ legitimate security concerns and fomenting a bloc confrontation.” Any attempts at containment would not be successful, Wang said.

More on the subject – China: Russia is Beijing’s most important partner in the fight against US hegemony