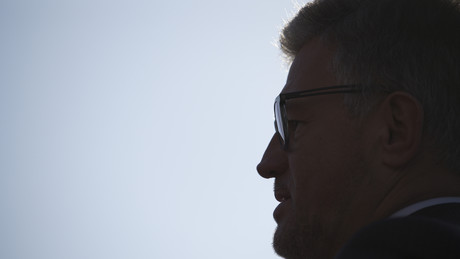 One could write an article about the Ukrainian ambassador almost every day. He didn’t deserve it. But one thing he’s managed to do with the help of the German “quality press” is to raise the still latent Russophobia in the West to the level it was at the height of the first Cold War – at least.

He’s done it again! The Ukrainian ambassador in Germany has broken the next taboo. Once again, the self-proclaimed “Germany’s leading daily newspaper” has implored the restless and ruthless Andriy Melnyk podium commanded for his folkishly charged provocations. Just last week there was already a collection from my side in the same place “Best of“.

On Wednesday, Melnyk was given half a page in the FAZ – with his quote as the headline, which in Germany after the atrocities of 1941 to 1945 could hardly have been thought possible: “All Russians are enemies.” Yes – you read that right! Even the most cold-hearted of all Cold Warriors will rub the tears of joy from their eyes in amazement!

Mr. Melnyk, depicting an entire nation as enemies is nothing other than fascism. You should be ashamed. Not only because of that, but also for their behavior in general. They should put their energy into visiting refugees instead of rushing them.

In the interview, the 46-year-old from Ukraine then started in his usual “diplomatic” way:

Again, not for the first time, Melnyk uses the historically sufficiently sullied formula of a “war of annihilation”, which this time, however, is allegedly being waged by Russia against Ukraine: Melnyk uses this choice of words repeated “a Holocaust trivialization and Russophobia of the worst kind, because Hitler and his henchmen waged a ‘war of annihilation’ against Jews and Slavic ‘subhumans'”. But even Hitler’s propaganda chief Joseph Goebbels was said to have said: “If you tell a big lie and repeat it often enough, people will end up believing it.”

With reference to the bad events in the locality Bucha Melnyk shows that he doesn’t want a truce with the Russians himself, but wants to continue the war by any means necessary:

“I believe that world public opinion should wake up now and stop forcing us to end this war as soon as possible, to introduce a ceasefire without the withdrawal of Russian troops. Because a ceasefire would mean that hundreds of other towns and villages that occupied for more than forty days, a similar terrible fate may await.”

When questioned about the behavior of the Ukrainian army, Melnyk actually frankly admits that it is Ukrainian soldiers shot Russian prisoners of war in the legs:

When asked why he had brusquely rejected the invitation from Federal President Frank-Walter Steinmeier to the benefit concert he had initiated with Ukrainian and Russian musicians as a sign of reconciliation, the Ukrainian ambassador made it clear:

“It can’t be about distinguishing between good Russians and bad Russians now, because Russia is waging a war against Ukraine. It’s not Putin who murdered people in Bucha. They were specific people from different regions of Russia. They have their relatives, they phone home, they loot houses. We have thousands of phone calls that we recorded for the war tribunal. Let me be clear: Russia is an enemy state for us. And all Russians are enemies for Ukraine at the moment. “

After this statement, one does not even want to imagine what Melnyk thinks of these “specific people from different regions of Russia,” since he recently defamed “Putin worse than Hitler.” So it is not surprising when Melnyk, when asked whether he had any Russian friends, explained succinctly:

“No, never had. For one reason: because what we are experiencing today was planned for many decades.”

And who is behind it is also clear to Melnyk:

“Putin’s propaganda has done a great job. Peace can’t be expected anytime soon. We can’t just go back to normal. That’s not going to happen.”

NATO’s eastward expansion since 1990 to the border of the Russian Federation, as well as the 2014 Maidan putsch financed by the USA with 5 billion dollars and the dismissal of the elected President Yanukovych by oligarchs, which made Ukraine the most corrupt country in Europe, are missing In Melnyk’s story, just as the eight-year Ukrainian civil war in the Donbass with its 13,000 Russians murdered by Ukrainian soldiers and neo-Nazi battalions or the western-funded, until recently top-secret biological laboratories are kept secret. After that, the interviewer Simon Strauss – as the son of the well-known writer Botho Strauss – could have asked the Ukrainian ambassador. But as is the case in attitude journalism: The first Cold War never quite ended at the FAZ.

More on the subject – Russophobia didn’t start with Ukraine. She’s been brewing in the West for a long time…