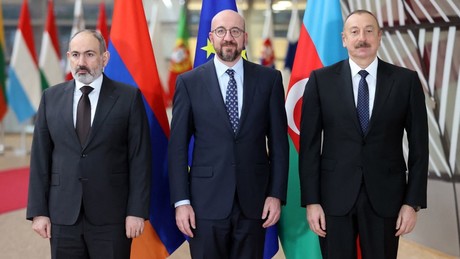 The dispute between Armenia and Azerbaijan over Nagorno-Karabakh began in the late 1980s when the Soviet Union still existed. While initially Armenians were able to occupy much of the territory, Azerbaijan conquered important parts of the province in 2020.

The two quarreling neighboring Caucasian states of Azerbaijan and Armenia have decided to conduct a “concrete process” to initiate peace talks. This was announced by the President of the European Council Charles Michel on Wednesday after talks with the Presidents of both countries, as the official Turkish news agency Anadolu wrote.

More on the subject – Russia: Azerbaijan has invaded Russian responsibility in Nagorno-Karabakh

Michel told journalists that Presidents Ilham Aliyev and Nikol Pashinyan had made “a lot of progress” during the talks. The EU representative added:

“This means that we have all collectively decided to start a concrete peace talks process to prepare for a possible peace treaty and to address all the necessary elements for such a treaty.”

The leaders of both countries agreed to set up a joint committee and a communication channel, Michel said after the five-hour conversation. He affirmed:

“We work very hard. We’re making progress. I don’t underestimate the challenges, the difficulties on both sides, but I feel there is a shared will to make progress.”

Following the talk, Michel released a press statement, reiterating the European Union’s willingness to expand its cooperation with Azerbaijan and Armenia to ease tensions in the South Caucasus and create a “safer, more stable and more prosperous” region.

According to Michel, both Aliyev and Pashinyan emphasized their will to reach a peace agreement between the two states as quickly as possible. The EU Council President added in the statement:

“To this end, it has been agreed that foreign ministers will be tasked with drafting a future peace treaty that will settle all the necessary issues.”

The presidents also agreed to set up a joint border commission by the end of April. In the statement it says:

“The mandate of the Joint Border Commission will be to delimit the bilateral border between Armenia and Azerbaijan and to ensure a stable security situation along and near the border.”

Since the collapse of the Soviet Union, the two states have been at odds over the Nagorno-Karabakh region, which officially belongs to Azerbaijan but is mostly inhabited by Armenians. Armenian troops occupied the province in the early 1990s. In another month-and-a-half war in the fall of 2020, Azerbaijan recaptured significant parts of Nagorno-Karabakh.