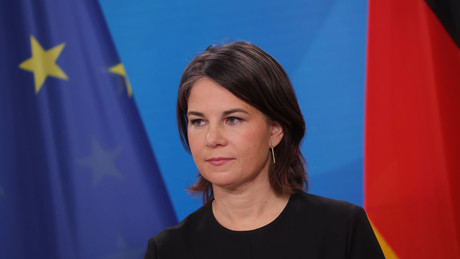 The Federal Foreign Minister left a current meeting of NATO foreign ministers in Brussels in the morning. Chancellor Olaf Scholz personally ordered Baerbock back to Berlin so that she could take part in the vote on compulsory corona vaccination.

AfD MP Martin Sichert stated during his speech in the German Bundestag in the morning that Chancellor Olaf Scholz was no longer in his seat during the mandatory vaccination debate after he had been there before. At 09:39 the journalist Florian Neuhann tweeted: “Reporting for ZDF from Brussels – about EU, NATO”, about the fact that the Federal Foreign Minister had to leave a meeting of NATO foreign ministers:

“Well – the German Foreign Minister @ABaerbock had to leave the NATO meeting early. At the request of the Federal Chancellor, she has to take part in the vote on mandatory #vaccination in the Bundestag. It should not fail because the Foreign Minister did not have a vote.”

Well – the German foreign minister @ABaerbock had to leave the NATO meeting early. At the request of the Federal Chancellor, she must take part in the vote on the #Vaccination participate in the Bundestag. It should not fail because the foreign minister did not have a voice. @ZDFtoday

According to information from the ZDF journalist, the German NATO ambassador Rüdiger König then had to step in to continue to represent German interests at the meeting. At the NATO foreign ministers’ meeting in Brussels on Thursday, among other things, additional arms deliveries for Ukraine will be discussed. A good hour later, the Federal Foreign Office only informed about the reasons for the event in Brussels:

“With a view to new deliveries of weapons, the federal government also wants to look at weapon systems that have not yet been delivered, announced Foreign Minister Annalena Baerbock information the Tagesschau before the meeting with the NATO colleagues”.

The official report from the German Press Agency (dpa) read: “Foreign Minister Annalena Baerbock (Greens) has to leave the NATO meeting in Brussels early because of the Bundestag vote on compulsory corona vaccination. The Chancellor asked the minister to take part in the vote, it was said on Thursday morning from government circles.”

During his absence in the plenary hall, AfD MP Sichert described Chancellor Scholz as a “lying chancellor” because he had promised his voters before the last federal elections: “We don’t need vaccinations”. After his speech, Sichert was given a reprimand, spoken about the President of the Bundestag Bärbel Bas (SPD). Sichert received another reprimand for calling Green MP Emilia Fester in his speech a “Bundestag chick”. In both cases, the designations would have represented an “attack on the person”.

More on the subject – Peskow: “While Europe is kneeling, Washington is making money”