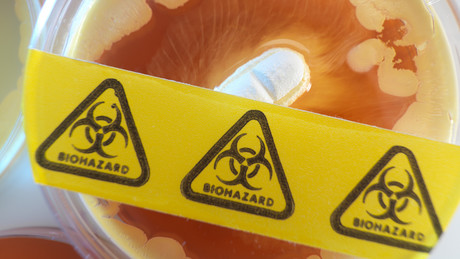 After some US bio-laboratories fell under Russian control during the Ukraine war, Moscow presented a series of documents about Washington’s suspected bio-research in the military sphere. China calls for thorough clarification of international community concerns.

The Chinese government said on Wednesday that it supports any global initiative that aims, within reasonable limits, to evaluate the recently discovered documents on US military biological research. This was reported by the Chinese news agency Xinhua. Dai Bing, China’s deputy ambassador to the United Nations, said during an unofficial session of the UN Security Council on biosecurity:

“Recently, the Russian Federation has released a slew of documents related to US military-biological activities, which has caused great concern in the international community.”

The Chinese Deputy Ambassador stressed that China suffered from the use of biological weapons during World War II and therefore stands firmly for the total ban and destruction of all weapons of mass destruction, including biological and chemical weapons.

More on the subject – Media Report: Hunter Biden secures funding for US bioweapons maker in Ukraine

“China firmly opposes the development, stockpiling or use of biological and chemical weapons by any country under any circumstances and calls on those countries that have not already done so to destroy their stockpiles of weapons of mass destruction as soon as possible.”

According to Beijing, all states should comply with the goals and principles of the Biological Weapons Convention.

“The current dynamics in the field of biological security make it clear that there is an urgent need to resume negotiations on a verification protocol under the Biological Weapons Convention and to create a professional, impartial and independent multilateral verification mechanism on this basis.”

Such a mechanism is a necessary but long-missing tool to eliminate potential biological weapons threats and strengthen the authority and effectiveness of the Biological Weapons Convention. This facility must not be thwarted by individual UN member states, Dai warned.