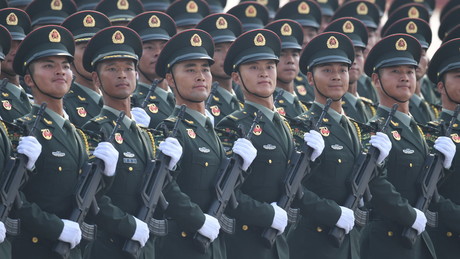 China usually refrains from using rhetoric in official statements. But in the face of several announced arms deals between the US and the Taiwanese authorities, Beijing is now resorting to thinly veiled threats.

China has harshly criticized the US for Washington’s approval of $95 million worth of arms sales to Taiwan and plans to help Taipei maintain its Patriot surface-to-air missile (SAM) systems, the Chinese Defense Ministry said on Thursday. The ministry wrote in a statement:

“The US side has already approved the sale of $95 million worth of military technology and armaments to Taiwan, and will also provide Taiwan with specialists to service its Patriot ground-to-surface missiles. China expresses its strong protest against this matter. In this In connection with this, we have made a serious complaint to the United States.”

The statement also said that such actions by Washington would constitute “a serious violation of agreements and gross interference in China’s internal affairs.”

“The Chinese People’s Liberation Army will take active measures to thwart any attempts by external forces to support the Taiwanese separatists under any pretext. We will resolutely defend our country’s national sovereignty and territorial integrity.”

Beijing has repeatedly expressed concern over military and technical cooperation between Washington and the Taiwanese authorities in recent years. Chinese authorities regularly reiterate to the White House the need to uphold the One China Policy.

China firmly opposes any form of official contacts between the United States and Taiwan, Chinese Foreign Ministry spokesman Zhao Lijian said also on Thursday amid reports of a possible visit by US House Speaker Nancy Pelosi to Taiwan.

The Chinese diplomat stressed that Pelosi’s visit to Taiwan would constitute a serious violation of the one-China principle and the provisions of joint Sino-US communiqués, which regulate a fundamental consensus between the two countries on the Taiwan issue. Also, such a visit would do great damage to China’s sovereignty and territorial integrity and deal a blow to the political base of bilateral ties, while sending the wrong signal to separatist forces seeking “Taiwan’s independence.”

China has announced its “firm protest” and has already made its “firm objection” to the US side, Zhao Lijian added.

The Japanese broadcaster Fuji-TV reported on Thursday that the speaker of the US House of Representatives, Nancy Pelosi, wanted to pay an official visit to Taiwan. According to the broadcaster, Pelosi plans to come to Japan on April 8, hold a meeting with Japan’s Prime Minister Fumio Kishida and then travel to Taiwan. It would be the first visit to Taiwan by a speaker of the US House of Representatives in over 25 years.

More on the subject – After NED’s visit to Taiwan, Beijing warns that “democracy” is no shield for secession efforts