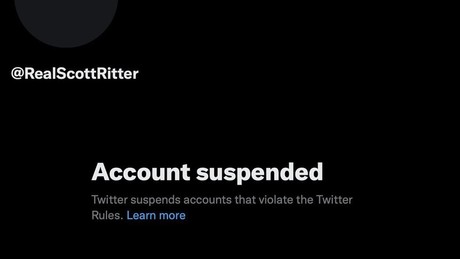 Former US officer Scott Ritter was briefly blocked from the short message service Twitter. The critical journalist suspects that the action is related to his view of the events in Bucha, Ukraine.

The short message service Twitter first “permanently suspended” retired US Marine Corps officer Scott Ritter on Wednesday and then released him again. The critical journalist suspects a sanction behind the action by the short message service, since he questioned the Ukrainian authorities’ claims that Russian soldiers had massacred civilians in Bucha near Kyiv.

Ritter is best known as a former UN weapons inspector who challenged US claims of Iraqi weapons of mass destruction, which Washington used as a pretext for the 2003 invasion. “Apparently I was suspended from Twitter for questioning the orthodox narrative of the so-called Bucha massacre,” Ritter said on his Telegram channel, showing a screenshot of the message he received from Twitter.

“I’ve appealed, so who knows what the future will bring,” Ritter said, adding that “freedom of speech in America today is an endangered concept.”

According to the screenshot, Twitter’s censors had ruled that Ritter broke the rules against “harassment and abuse” by claiming that Ukrainian police had committed crimes against humanity in Bucha and were trying to use the US to shift the blame onto Russia.

“Well it looks like I’ve been reinstated. No official word from Twitter on what the problem was or how/why it was resolved. But I’m sure they understand the concern many of you here on Twitter. Thank you for standing up for freedom of expression. Good night!”

Well, it looks like I’ve been reinstated. No official word from Twitter about what the problem was or how/why it was resolved. But I’m sure they took notice at the concern expressed by many of you here on Twitter. Thanks for speaking up in defense of free speech. Goodnight!

In an opinion piece published by RT International on Monday, Ritter examined Ukrainian claims that withdrawing Russian troops massacred civilians on their way out of Bucha. He pointed out a number of inconsistencies and “red flags” and placed them in the context of the propaganda war raging parallel to the ongoing military conflict.

Ritter is a retired US Marine who inspected Soviet weapons under the now-defunct INF treaty. From 1991 to 1998 he served as Senior UN Weapons Inspector in Iraq and served on General Norman Schwarzkopf’s staff during the First Gulf War.