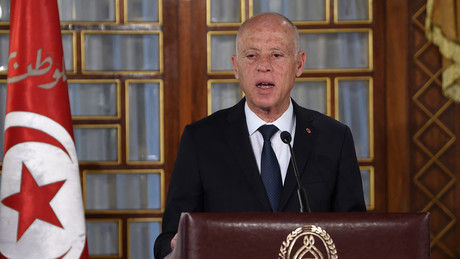 “The dissolution of the parliament, which includes the elected MPs, gives reason to think about the future of Tunisia and is a blow against the will of the Tunisian people,” Erdoğan said at the beginning of the week.

“We regret that the Assembly of People’s Representatives, which held a plenary session on March 30, 2022 in Tunisia, has been dissolved and a criminal investigation has been launched against the MPs who attended the session,” said the Turkish President. In response, Tunisian Foreign Minister Othman Jerandi said he called his Turkish counterpart on Wednesday and summoned the Turkish ambassador to Tunisia.

“Tunisia reaffirms its interest in close ties with friendly countries, but maintains the independence of its decision-making and refuses interference in its sovereignty,” the Tunisian Foreign Ministry said.

However, there is no evidence of this, the German press agency quoted Rached al-Ghannouchi, the speaker of the parliament and head of the Islamist Ennahda party. These are “political, malicious allegations” to harm Ennahda, including “treason, terrorism and money laundering”. The Islamist Ennahda Party is the largest parliamentary group and is considered Saied’s most important political opponent.

According to al-Ghannouchi, he and his party colleagues did not answer any questions in investigations related to the meeting and invoked their immunity. However, Saied had previously lifted the immunity. Last week he commissioned an anti-terrorist unit to summon several MPs, including al-Ghannouchi, for questioning.

Despite Saied’s dissolution, however, Parliament wants to continue to meet and oppose the actions of the head of state. Virtual meetings would continue to take place in the future, al-Ghannouchi told the German Press Agency. A protest is also planned for next weekend. Saied had deposed the then Prime Minister Hichem Mechichi last July and suspended the work of Parliament. He also lifted the immunity of all MPs.

Despite international protests, he later extended the measures. His opponents condemned his actions as a coup d’état. The former law professor, on the other hand, referred to the country’s constitution. Most recently, he also pushed ahead with the restructuring of the judicial system, and in February he decided to dissolve Tunisia’s Supreme Judicial Council. Saied also announced on Wednesday that he would change the structure of the Independent High Authority for Elections (ISIE). Saied is also planning a constitutional amendment, for the preparation of which Tunisian citizens were interviewed this year by a committee on various topics such as education, culture, elections and the economy. Saied enjoyed popular support for a long time, but protests are now frequent. The people in the popular holiday destination are struggling with the consequences of widespread corruption, an economic crisis and high unemployment. Young people in particular hardly see any prospects for the future in Tunisia.