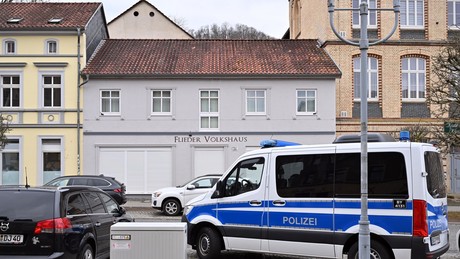 GSG9 officers and other police officers searched the homes of members of right-wing extremist groups in eleven federal states on Wednesday. It is about several criminal and terrorist organizations with 50 suspects.

After years of investigation, the security authorities have struck a blow against the militant neo-Nazi scene. On Wednesday morning, properties belonging to right-wing extremists in eleven federal states were searched nationwide. The Federal Prosecutor’s Office is investigating against 50 suspected right-wing extremists, as the authority in Karlsruhe announced. Four men were arrested and are in custody.

The measures are aimed at the groups “Knockout 51”, “Combat 18”, “Nuclear Weapons Division Germany” and “SKD1418”. In the morning, 61 objects were searched at the same time. According to information from the investigative environment, it is said to be the largest concentrated action that was carried out on behalf of the Federal Public Prosecutor: Over 800 police officers from the BKA, federal police and state criminal investigation offices, including GSG9 units, were deployed.

According to information from the world, one of those arrested, Leon R. from Eisenach, is said to be a key figure in the right-wing extremist scene. The 24-year-old from the environment of the NPD is considered the central organizer behind the militant martial arts group “Knockout 51”. In this context, the NPD headquarters in Eisenach, the “Flieder Volkshaus”, was also searched because the neo-Nazis practiced martial arts there. “Knockout 51” is a group that “under the guise of joint physical training attracts young, nationalist-minded men, deliberately indoctrinates them with right-wing extremist ideas and trains them for street fights,” the federal prosecutor said.

Leon R. is also said to have been in contact with the “Nuclear Weapons Division” in the USA. The investigations have been running since 2019, and the whistleblower at the time was the Federal Office for the Protection of the Constitution. The 24-year-old contacted the “Nuclear Weapons Division” in a forum, which got the investigation started. In addition to the “Atomic Weapons Division,” the authorities later also had “Knockout 51” on their radar and later followed other organizations against which the searches were directed. Through his contacts with another suspect, the investigators discovered that the ban on “Combat 18” was being undermined, it said.

The “Nuclear Weapons Division” is a right-wing terrorist network that was founded in the USA in 2015. In a founding statement, the group describes itself as a “very fanatical, ideological group of comrades”. The group worships Adolf Hitler and wants to spark a “race war” through attacks and murders.

All in all, the “Knockout 51” case involves 14 suspects who are said to have founded a criminal organization. The accused are also said to have tried to establish a “Nazi neighborhood” in Eisenach under their control. In addition to Leon R., Maximilian A. and Eric K. were also arrested in Eisenach and Bastian A. in Rotenburg ad Fulda. They are also said to have played a leading role in “Knockout51”. They are also charged with dangerous bodily harm. Among the suspects are said to be two men with a connection to the Bundeswehr, only one of whom is said to have had access to weapons. According to a report by Spiegel magazine, it is a former officer cadet. (rt de/dpa)

More on the subject – Explosion in Eisenach – probably political background